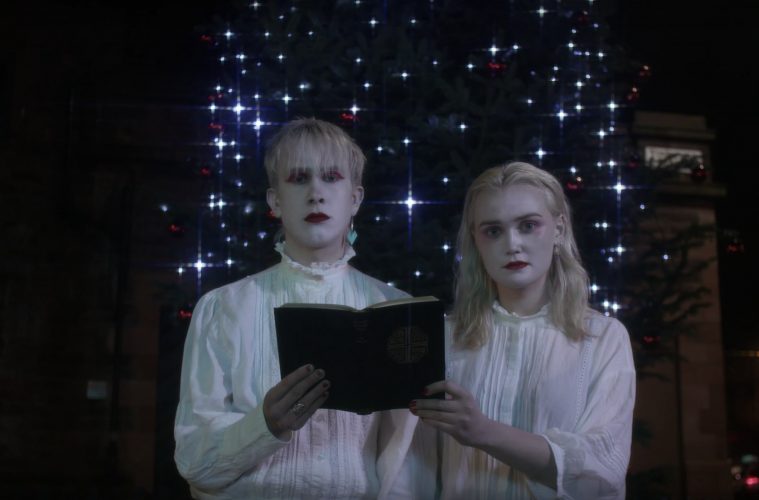 The festive season is upon us! To celebrate, The Ninth Wave have revealed a cover of The Pogues’ ‘Love You Till The End’ accompanied by a heavenly new video.

Produced and recorded by the band in Glasgow, ‘Love You Till The End’ is a departure from The Ninth Wave’s trademark brand of dark, introspective post-punk, instead leaning into their pop sensibilities and embracing euphoric electronic sounds. Frontman Haydn Park-Patterson’s intensely emotive vocals carry the track into a soaring hook, breathing new life into the poignant Pogues album cut. The cover’s accompanying visual sees Haydn and bassist / vocalist Millie Kidd experiment with religious symbolism on the streets of Glasgow, reimagining classic Christmas visuals in The Ninth Wave’s characteristically offbeat style.

Speaking about the track, the band say: “This year has been the busiest we’ve had so far – we recorded an album in the summer and we’ve been very lucky to play in some of the places that we have this year. We decided to make this cover the final thing we put out this year because The Pogues aren’t exactly like our band but still capture emotion in the same way. We did the whole thing in a couple of days – we recorded it all one night in our studio and then it was mixed by Dan who we’ve worked with since our first releases.”

‘Love You Till The End’ follows The Ninth Wave’s recent singles ‘Sometimes The Silence Is Sweeter’ and ‘A Wave Goodbye To The People Who Said I’d Win’, which garnered support from the likes of BBC Radio 1 and NME. The Glaswegian upstarts were recently named one of Amazing Radio’s Tips for 2019 and have been widely tipped by critics as one of the most promising new names of the coming year. The remainder of 2018 will see The Ninth Wave play their biggest headline show to date at Saint Luke’s, Glasgow, while the band gear up to unleash a fresh collection of material in 2019.

The Ninth Wave will play the below live dates, with more to be announced in 2019. Tickets available here.