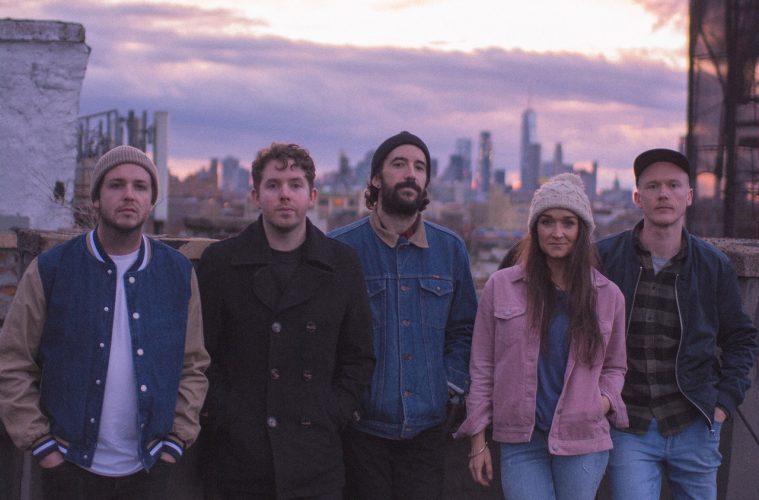 Melbourne indie folk outfit The Paper Kites have had a mammoth 2018 so far; with their song Bloom officially certified Gold in the US, Canada, Italy, Netherlands, NZ and Australia, and the release of two gorgeous LPs, On The Train Ride Home and On The Corner Where You Live, to widespread critical acclaim. To celebrate all things The Paper Kites, they have announced the Where You Live tour – a massive run of Australian shows for early 2019, kicking off on February 28 at Molo Live in Canberra, before moving through Newcastle, Sydney, Adelaide, Perth, Dunsborough, Miami, Brisbane, and wrapping up with a performance at Melbourne’s iconic Forum Theatre on March 23.

After announcing an enormous US/EU tour earlier this year, which will see the group playing shows from San Diego to Seattle, from Vancouver to New York and everywhere in between during November/December 2018, The Paper Kites are thrilled to announce some shows back on home soil, as bassist Sam Rasmussen enthuses, “It has been way too long since we have had the opportunity to tour our home country.  We are looking forward to visiting some of our favourite cities.  We have been rehearsing for the upcoming tours and the way the new album is translating live is getting us really excited!”

The Paper Kites (which also includes frontman Sam Bentley, vocalist Christina Lacy, guitarist Dave Powys, and drummer Josh Bentley) have earned a loyal, organic fan base all across the world.  With monumental streaming numbers, 200 shows across the world in just under 3 years and recent Gold accreditation around the world, including the US with nearly 700,000 copies of their track Bloom being sold in the States alone, The Paper Kites are Australia’s quiet achievers, and their world class songwriting prowess shines on On The Corner Where You Live.  Thrilled to bring On The Corner Where You Live to life on the upcoming Australian tour, Christina says, “After spending so much time touring and recording overseas over the past few years we are so happy to finally bring these new songs home to Australia.  We can’t wait to head back to some of our favourite cities around the country and share this new album with our home crowd!”

On The Corner Where You Live is co-produced with Grammy-winner Peter Katis (Interpol, The National) at his studio in Connecticut – a 120-year old Victorian era home that the band lived and recorded in for 5 weeks.  Lead vocalist Sam spoke of the moment the album’s concept clicked together, saying “It’s a collection of stories about these characters all living in an apartment building; I wanted to capture moments, feelings, it’s about people and their stories.”  This album is one best listened to from start to finish, as each story seeps into the next; meditative yet complex, On The Corner Where You Live will not disappoint The Paper Kites’ loyal fanbase, and will enamour new and existing audiences alike.  Immersed in an aural diet of blues and jazz, the band collaborated with Los Angeles film-noir artist Gina Higgins on the album’s artwork, who also painted the cover for On The Train Ride Home and worked closely with the band on the concept.

Pre-sale tickets to the Where You Live national tour are on sale from Tuesday October 30 at 2pm AEDT until Wednesday October 31 at 11.59pm AEDT.  General public tickets go on sale Thursday November 1 at 9am AEDT.

Stream single: DEEP BURN BLUE
Purchase/Stream: ON THE CORNER WHERE YOU LIVE 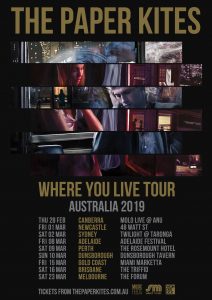