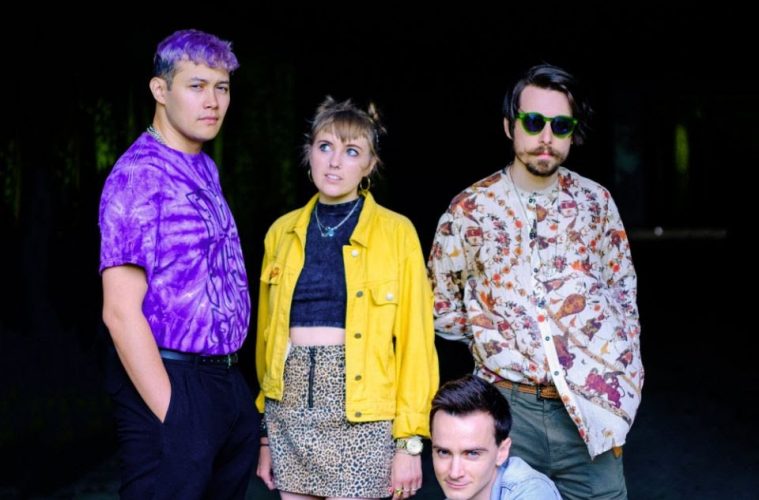 rockyourlyricsSeptember 16, 20190 views
Rock Interviews0 views 08 min read
How do you usually write the lyrics of your songs?

Adrien: Whenever I come across a word or phrase I really love I’ll write it down. Sometimes they’re really weird phrases that come in dreams or silly kinds of slogans (like “your friends are overrated”) or ridiculous melodramatic statements (“I will never fall in love”). When I’ve got a good demo going, I’ll open up this collection of stuff and see if anything really pops into place. Finding a few words or a phrase that captures the feeling of the instrumental really snaps things into focus, and from there it’s a matter of writing around that idea with something that’s emotionally honest.

Erica: I usually start by having some emotional theme I want to write lyrics about.  I’ll get into a stream of poems before I actually start getting full songs.

Tim: I usually start lyrics with one or two strong ideas and then try and come up with temp lyrics while writing a melody and see if any of those lyrics point to bigger themes.

Erica: Writing something that people connect to.

Erica: I’m only scared of people realizing I’ve written mean things about them.  Even if they’re true, I never want their feelings to be hurt.

Adrien: The most meaningful set of lyrics I’ve written are for an old song of ours called “Apollo.” Growing up mixed raced in America (and probably other places, although I can’t speak to that) is a strange experience. At a certain point, you recognize that you’re different. It’s not always overt racism or anything. It’s more of a creeping, insidious thing. You watch tv and movies and no one looks like you. Your teachers, your friends, the people in town, they all kind of go together. They like to ask you questions they’d never ask each other, like “Where are you from?” or “How long have you been here?” or “What are your parents?” or (the worst one) “What are you?” And you try and try for years and years to blend in but people still ask. And so, without realizing it, you feel different. Abnormal. Lesser than. It took a long time for me to figure out that a lot of my self esteem and body issues came from this place. When you’re on the outside of culture looking in, it’s easy to feel alienated, like you don’t belong. And so the song was an attempt to put some language behind that idea for myself, so I could figure out what exactly I felt and where to go from there.

What inspired “Overrated”, part of your EP “The Right Stuff”?

Adrien: Musically, the track has this sing song-y girl group vibe to it by way of “Dig Me Out” era Sleater-Kinney. A lot of angular bright guitars, nursery rhyme melodies, and a call and response vocal. Lyrically, it’s about meeting someone you think is awesome and you wanna hang out with them all the time except everyone they associate with sucks. Just like a “wow, these people are no fun, you should spend more time with us.” kind of vibe. It’s also got this vaguely cult-y The Secret History or The Incendiaries thing going on, like “come join us, we’ll do satanic rituals in the woods” or something. I know as a group of four people, our band can be impenetrable to talk to sometimes. And Danny and Tim + Erica and I always somehow end up wearing matching outfits, like two sets of twins. So yeah, I think the cultish vibes come from a real place.

Tim: ‘Faster Now‘ is about looking into the night sky and wondering if we’re alone. It can be a really overwhelming feeling of loneliness and pointlessness that I tried to point to in the lyrics.

Do you remember the day you wrote “Girlfriend”?

Adrien: As a group, we normally like to grab a few drinks after practice at the bar next door to our practice space. One night last winter, Tim and I were talking when “Why Can’t I Touch It?” by the Buzzcocks came on and immediately stopped our conversation. We just sort of sat there listening to it, and for hours afterwards the main bass riff was stuck in my head. I tried to write a demo similarly built around one incessant riff. I’d been reading Rob Sheffield’s Dreaming The Beatles and remembered the anecdote about Kurt Cobain writing “About A Girl” after listening to the album Please Please Me on repeat. So after listening to a bunch of early Nirvana and early Beatles, the chorus came together. And I’d always loved the way the harmonies stacked in the bridge of “Daytripper” and “Twist and Shout,” so I threw something like that in too.

The song is written during the aftermath of a breakup. You feel so miserable that you swear off love forever, but deep down you know you’re lying to yourself. It’s like when you’re brutally hungover and tell yourself that you’ll never have another drink again. Yeah… good luck with that.

Erica:  I’d say that the common link in all of these songs is collaboration. We really all played a part in writing this EP.

Tim: I think the link is that we can all identify with the point of view of each other’s songs to some extent.

Tim: When to take things away.

Erica: I loved working with Julian Fader… he told me I could use his entire kit (cymbals and snare included) and I personally love the way the kit sounds on The Right Stuff.  They also provided a lot of fun auxiliary instruments for us to play with.

Adrien: Carlos (Hernandez) was pretty firm about first take best take. We’re all overthinkers, especially when we’re singing, so it was great when he’d tell us that we had the take already and could move on.

Erica: 2019 has been a busy and exciting year for us.  I guess our next goal is to record more songs!