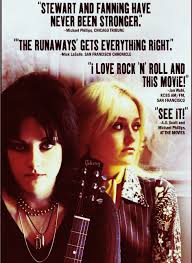 The Runaways – The Movie

Kristen Stewart and Dakota Fanning (or better Joan Jett and Cherrie Currie) are the main stars of the movie titled “The Runaways” (http://therunaways.com) directed by Floria Sigismondi, released in 2010 and based on the true story of the band, extremely popular in the seventies.

In fact the movie takes inspiration from the auto-biography written by Cherrie and titled :”Neon Angel: A Memoir of a Runaway”  published in the same year.

One thing that will surprise you is the fact that the protagonists of the movie are extremely similar to the real people; you would say it is normal, but when you will see the movie you will understand what we are talking about.

It seems that the real Joan, Cherrie, Lita (Ford), Sandy (West), Jackie (Fox) are playing themselves on the screen, the famous live in Japan of “Cherry Bomb” is looking exactly like the original one made in 1977.

The movie, despite the fact that both Joan and Cherrie said it doesn’t completely tell the story of the band, is for sure describing the beginning, the reach of success and the fall of one of the bands that made the history of rock and roll.

The Runaways producer Kim Fowley (http://www.kimfowley.net) interpreted amazingly by Michael Shannon, played an important part on the success of the band, guiding and helping them finding their sound and also contributed to the songs lyrics.

In their career The Runaways made four studio albums and one live in Japan that achieved an incredible success.

According to different sources, the movie didn’t had an amazing success in the cinema theatres, it collected a little bit over 4 millions dollars while it seems it costed twice the amount.

In our opinion this doesn’t mean that the movie was badly played or interpreted….actually we love it….. most probably, what happened is that the people didn’t come to know properly about it.

As all the rock and roll movies, the soundtrack is very important, it features over 33 songs from The Runaways, Joan Jett, Sex Pistols, The Stooges and many more……

Are you ready for some rock and roll? Yes? then take your dvd player and be ready for one hour and a half of pure energy!