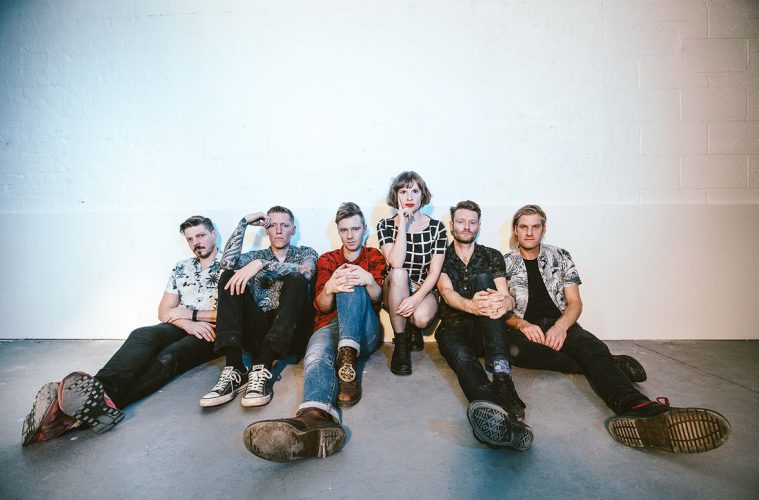 The Story Is… – Interview with Dan Heptinstall – Skinny Lister

It varies. I’d say with most of the songs I write – the main body and concept of the lyrics come at the same time as the music. Often I’ll be twiddling away on the guitar and something of interest will pop up and I will pursue the idea. This generally means that the music and lyric compliment each other from the off. Having said that – there are many examples of my songs when I have had a title, or even just a line, and used that as a springboard to creating a full song. With a track like ‘Artist Arsonist’ from the new album, the lyrics wrote themselves, the words were all there really – it was just telling the story of the guy who lived in the flat below me who had tried to set fire to his flat. The refrain ‘I just don’t care anymore’ is what he said to the police as they marched him off in handcuffs. It’s worth mentioning also, that although I often write the bulk of a song in a few hours, I often spend weeks refining the words to make sure I’m happy with everyone of them, and that every word is there for a reason.

For me personally – I’d say it’s most important to make some sort of connection with the listener. This usually comes from exposing some sort of truth in the lyric, which obviously works best set against a great melody. Those lyrics of ours that really connect with people, and get sung back to us the loudest at live shows, are the ones that people can easily identify with. I think it was Springsteen who said people don’t come to his shows to see him – they come to see themselves. And I think great songwriting allows that to happen.

Yes. But whenever I’ve felt like that – it usually turns out that it’s been a good decision to do it. As I said above – I think conveying some kind of truth in a song is important and will ultimately be the thing that helps it connect with the listener. The added advantage of keeping it personal is that it will be more original. If you write about an experience unique to your own situation, and colour it in with all those little personal details, then it should come out as an original and unique piece of work. The master trick then – is to make it somehow universal at the same time so people can project themselves onto the song in some way.

I remember Max, Skinny’s accordion player, saying I should write a song about a time I got beaten up (not too badly!) on Oxford Street. That yielded a good track that is still a live favourite – ‘Trouble On Oxford Street’. I really enjoy the chorus of that song and how the rhymes work.

I didn’t know where I was

Drink got me into this

I didn’t know where I was

It’s always satisfying to come up with original rhymes and to always avoid the obvious when you can, to my knowledge no one evr rhymed Krakatoa with Rocky Balboa before.

What inspired “My Distraction”, part of your latest album “The Story Is…”?

This one I think was kind of initially inspired by the style of some of the stuff I was listening to at the time such as Elvis Costello, Blondie and Modern Lovers. Lyrically it turned into a kind of observation on modern technology and how people are permanently distracted by technology – namely their smart phones. But on another level – it’s a straight forward love song about being obsessed with someone to the point where you’re oblivious to anything else.

I’ve always been drawn to writing tracks that sound like they may have been written a few hundred years ago, and this is one of those. It’s kind of in the style of a traditional sea shanty and has those guttural words and a chorus that is easy to latch on to and sing along to, and has become a bit of a Skinny Lister trademark. I actually wrote the bulk of this track on Flogging Molly’s Salty Dog Cruise, which is a punk rock festival on a cruise ship that sails around the Bahamas for a long weekend. I like to think that this infused the song with some extra saltiness! I like that this track has a positive message in these uncertain times – ‘Despite the times I’ve shot and missed, I remain an optimist.’ I think it’s important to remain optimistic.

Do you remember the day you wrote “38 Minutes” – (click here for the news about it)?

Yes. I remember seeing a tweet from a friend who was from and living in Hawaii at the time of the false missile alert. His tweet said he’s received the alert by text while in a coffee shop, he’d then stripped naked and gone outside and raised his hands in a ‘take me now’ fashion. Not sure if any of this was true but the imagery of this stuck with me. Then I read the news of how a parent had put their child down a manhole as a desperate attempt to protect them, and someone else had chosen to see out their last moments by cracking open a very expensive bottle of whisky. So the lyrics we’re all kind of there really as I sat down to write that. This was definitely a case of I had the idea to write about this before I’d picked up an instrument. I think I had this one written within an hour and I had a full demo up and running by the end of the day. It’s nice when that happens!

The stories are thematically quite diverse. The thing that ties them together is that all the stories on there are very real and actually happened to me, or I actually observed. The final track on the album – ‘Any Resemblance To Actual Persons, Living Or Dead, Is Purely Coincidental’ is a kind of summing up of the album, and I hope leaves a feeling of some sort of completion and cohesion.

We’ve been fortunate enough to work with a number of great producers over the four albums we’ve made, and we’ve picked up a lot from all of them. I think in their own way the one thing they have all done – is pushed us to be ourselves.

2019 is gonna be a busy one! With the new album out on 1st March – we have extensive tours across UK and Europe. We then head to the US in May for support shows with Bouncing Souls, Frank Turner and a bunch of headline dates. And summer is booked up with festivals across UK and Europe. So yeah – looking forward to getting the new songs out there!