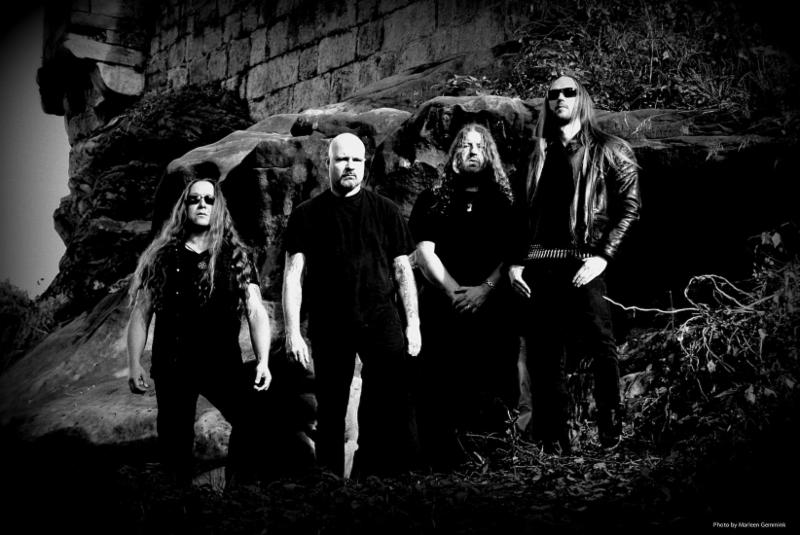 RYL: Your new album titled “The Suffocating Darkness” is a very pleasant surprise! After 18 years …. What made it possible?

SOULBURN: (https://www.facebook.com/official.soulburn/timeline)Eric and Bob were thinking about starting a new band in the vein of old Bathory, Venom and Celtic Frost.

After jamming some riffs they thought: Why not call it Soulburn again! It just felt right. Our label Century Media was enthousiastic as well about the idea, and so it happened. Remco Kreft was recruited on guitars and me on Bass and Vox and the beast was renewed~

RYL: First Single is “Under the Rise of a Red Moon ”….What inspired its lyrics?

SOULBURN: The topic of the lyric grows on me during the song. From sentence to sentence things start to happen and a story is told. The atmosphere the riff reflects blends in on the emotional content of the words.

With Under the Rise of a red Moon, I knew it became something special. This was also the first lyric I wrote for the album. It gave a setting for what was to become “ The Suffocating Darkness’

The lyric deals with individuality from a satanic point of view. Divinity under Will, Will under Chaos, Chaos under Self. To kill a god is to free the soul. The Red Moon, refers to the bleeding heavens from slaughtered angels, colors the moon red. When the red moon rises, The self is released.

SOULBURN: All lyrics breath darkness and death with occult symbolic phrases woven into them. Also the philosophical aspect of life and death, god and devil are used. This way it may take the listener into his own mind, painting thoughts that could increase the darkness of the album.

Making you think unconsciously in the twilight of your mind. Asking yourself: what the hell am I thinking anyway? This all contributes to the apex of the dark spheres the album takes you. Lifts you up from emptiness but leaves you in the void.

Then picking you up again to be set ablaze in a whirlwind of death and demons and finally back to the abyss once more.

RYL:  Do you remember how you wrote “Feeding on Angels” ?

SOULBURN: All lyrics on the Feeding on Angels album were written by Wannes (Pentacle). Former singer/bassplayer of Soulburn. I don’t know the exact meaning of the lyric but I can translate my vision upon it.

To me, Feeding on Angels is about a personal war with heaven. As seen through the eyes of a demonic figure, Satan as you please. I believe it has some biblical value as well. Strong lyric, it works very good with the song and is also very strong story wise.

SOULBURN: All lyrics I write come spontaneously while listening to the music. I sit behind my computer, start the track, and words begin to flow on the screen. I immediately have the vocal line in mind.

After the track is over, I overview what happened on the screen. I repeat this over and over until I’m satisfied with the result. Maybe a few small changes, but first expression mostly fits the song like a glove.

SOULBURN: No it’s not! Just find the right persons to play with. And most important, the vision has to be clear. Also make sure that the ego is less important then a good riff or song!!!

A lot of bands are forgetting this golden rule nowadays.

That’s when a song becomes lame. A solo with no value, spirit or meaning can fuck up the entire song for instance. If the riff isn’t asking for one, leave it! Ahh well, some people get it, some people don’t.

SOULBURN: My guilty pleasure? I love smooth and sexy electro-pop like Ladytron, Royksopp, Karen Park, Vive la Fete etc…But I don’t see the guilt in this. It’s just good music to fuck to.

SOULBURN:No we’re not. We have done 3 shows with Bolt Thrower in Germany together with Morgoth, which was great! We have some festivals coming ahead like Partysan, Neurotic Deathfest and some other shows.

We are not a touring band. We might play 10 till 13 shows in a year. This way we keep it fresh for ourselves and the fans.

SOULBURN: The last song we wrote was published. This was Hymn of the Forsaken II. We are currently working on new material.

Expect a slower heavier version of “ The Suffocating Darkness”. Keep the soul burning!