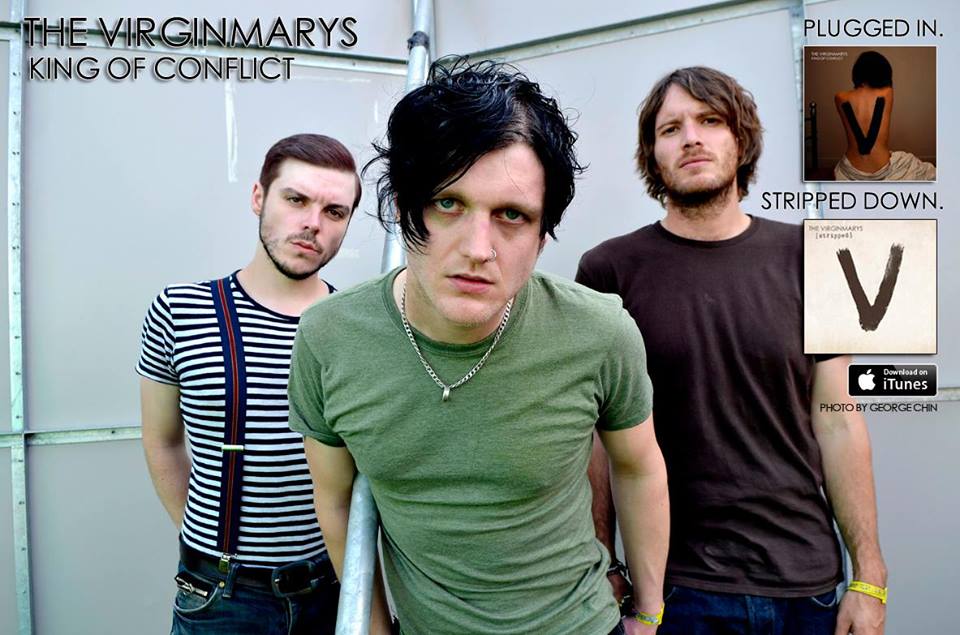 “King Of Conflicts”, the last album of The Virginmarys (http://www.thevirginmarys.com) , is having a huge success, the band is touring all over the world and their fans are growing exponentially.

Recently, we  spoke with Ally Dickaty, singer and guitarist of the band, that explained to us the future projects of the band and the truth behind the lyrics of their songs.

RYL: “King of Conflicts”, your last album, is having an amazing success, congratulations! In your opinion, what makes it so special?

Ally: We worked really hard on it and we have a great fan base that supported it and connected to us also trough the social networks. It is amazing to see such a good response from them.

RYL: And now, even Japan is crazy for The Virginmarys…..

Ally: We are heading to Japan on Sunday! It is a Country we always wanted to see, we are looking forward and we are very excited to be there.

RYL: As you know Rock Your Lyrics is all about lyrics, how do you write your songs?

Ally: Sometimes I sit down and I write them, sometimes I take notes down and then, in a second moment, I finish them off.

I always write lines, I keep them aside and then I rediscover them; writing lyrics is an ongoing process for me.

Before I’m ready to present them to the rest of the Band, I do review them multiple times until I’m completely happy.

RYL: How do you go from the lyrics to the music?

Ally: Most of the time I get the music first and then I write the lyrics.

Sometimes, I have the lines and I know how the music is going to be, so I work around that idea until it fits perfectly.

RYL: What is behind the song “Just a Ride”?

Ally: It talks about the end of a relationship, looking back at it and see what happened wrong.

RYL: Among all the songs of the album, musically speaking, which one do you think represents best the band and why?

Ally: “Dressed to kill” is my favourite song of the album; it was one of the last ones to be written.

I’m happy with it lyrically and it represents the direction the band is going these days.

Usually I prefer my most recent songs, they are more near to what I live and what I feel.

RYL: Your style is very unique, and this is cool; recently Kerrang defined it as edgy and psychedelic, do you agree with them?

Ally: Lyrically I try to be as honest I can be, I want us to be pure energy and rock n roll.

RYL: We believe that this energy is a huge key factor of your success and people feel it! Classic Rock included your album as one of the best of 2013….

Ally: It is crazy to be near to names like Queen of Stone Age and Black Sabbath! It is a massive privilege for us! We just work hard, make good music and to be recognised for it is just phenomenal

RYL: How did your tour go? You were in USA and Europe, which show gave you the most during it?

Ally: We played in so many places in America and we had a great response. Chicago was a great place to play, New York as well.

We just did a really good gig in Amsterdam, it was incredible.

We did Germany, Denmark and more…..it was great to meet a lot of fans while touring.

RYL: What about your new projects? Are you currently writing new songs? Recording in studio?

Ally: We are working on a second album and we are continuing to tour across the world. Right after Japan we will go back to USA and then UK in November.

We want to do a second album that will be as great as the first.

In the meantime we will prepare a live dvd that will be released next year; it will be good for all the people that didn’t had the opportunity to see us live.

RYL: In the song “Bang Bang Bang” (our favourite) you are saying that TV teaches us to live in fear and to stay home…. We agree with you, how can music fight against that?

Ally: Music is a very passionate way to give your opinion on what is happening out there, next to you.

Media is a very powerful tool, but it is responsible for more people realises.

There is a lot of brainwash and telling to people what to do and the consequence is that a lot of persons are getting scared.

Music is a great way to express this desire of freedom.

RYL: How difficult is to break through with the music?

Ally: It is very difficult, the only thing you can do is to be coherent with yourself, believe in your capabilities.

Keep on doing the best of what you can do and , extremely important, you must enjoy what you do……ultimately people will recognize that.

Be true to yourself don’t do like some bands as Coldplay that write and sing what people want them to do.

Music needs to be unique to the person that listens.

RYL: Let’s go back to the songs and talk about “Lost Weekend”; you are saying: “Will somebody save me from myself tonight”.

You were going through a lot of pain when you wrote it? Can you tell us more about it?

Ally: I had a awful weekend due to problems in my relationship. I was not eating and I was drinking a lot.

I wrote this song over that weekend, I was really trapped and I was thinking about what was going on inside myself.

RYL: You recently did a competition on your website where your fans, just sharing part of your lyrics, can win signed stuff from the band. It is great to give to them the opportunity to discover what you wrote and win also something….

Ally: We got a great response from it; even lyrics like “Lost Weekend” that are kind of sad are of some kind of help for people because are real !

RYL: Last question is about the title of the song “Dead men’s shoes”, how you selected it?

Ally: It comes from the Elvis song “Blue Suede Shoes”, it is a play on words.

Dead man’s shoes is a say, if you wear them it means that you are going to die……so we just played with the words…

A little Elvis in our album 🙂 …