The Way Out – interview with DECEMBER IN RED

RYL: Tell us about your album “The Way Out”, what it means for you?

December in Red: The build up to the release of this album was intense for us because of how much we put into the making of it.

This album is a good representation of where we’re coming from currently. It’s our second album and we’ve gone through a lot of transitions as a band since we made the first one. The first album was also made over a longer period of time.

The energy that was created in the studio due to the short period of time that we took to track this album added a lot to the overall vibe and intensity that we were trying to have show through.

I think the songs flow through on the album from beginning to end like one long storyline going in different directions and ultimately coming to a conclusion on the last track..

We were in there night and day for just a few weeks focusing on getting the best out of ourselves.

RYL: Let’s talk about the song “Send me a Postcard”, what inspired its verses?

December in Red: This song is about moving along through time assuming that we will be able to continue on forever in one situation or another although we make the situation more and more unsustainable through thoughtless actions.

December in Red: The songs on this new album vary in subject matter but the title “The Way Out” applies to each one in a different way.

Sticking to your convictions and finding the path to better things, or just transitioning from one situation to another is the basic overlying concept.

RYL:  Do you remember the day you wrote “Hooks and Splatters”?

December in Red: Hooks and Splatters was the first new song written for this album so it’s been a while. Our original drummer had left the band and Marc took over pretty quickly.

We were on the road playing shows with him in only a few weeks from the day he came in to try out.

This was the first song we wrote with him as our new drummer and we were all pumped. Our lineup was complete with him being such a perfect fit for the group and everyone was full of energy.

RYL: How do you usually write the lyrics and music of your songs – what is your process?

December in Red: Usually, someone comes in with something new and we all jump in head first. Everyone takes off with their own parts and puts in thoughts on how we want to structure it.

I start experimenting with different melodies and rhythms using whatever arbitrary lyrics pop out first. Getting a hold of melody lines with good hooks and good rhythms is of huge importance for the way we want our songs to be.

Sometimes I really like the way the words sound together, especially if they jibe with the feel of the song and I look for subject matter that works.

There are always themes that I’ve got kicking around that eventually fit just right with something that we’re writing and they get paired up.

December in Red: My favorite lyrics from this album are the ones from Corduroy. There are a lot of cool colorful metaphors that I can visualize. The first lines, which are probably my favorite from the song are “In one night, we collide and ignite, and just as the flash begins, the earth ceases to spin. We begin again.”

This one was inspired by my fiancé and what it was like when we first got together. “This room breathes with the energy radiating from your heart and mind” is a lyric about the feelings that came with those experiences.

Other lyrics like “For the cold nights under streetlights, for the messages in the morning” are literal references to some of the things we did together. It was one of those songs that lyrically came out very easily.

December in Red: It’s vitally important not to let the music you make be influenced by negative criticism or the fear of how people might hate on it. It causes you to doubt yourself and not try things you might really want to do.

It takes a lot to pour your heart out for everyone to form their own opinions on what you say.   You need to have a thick skin and trust your own instincts.

No one does their best when they’re holding back like that and there will always be haters no matter what you do.

RYL:  You’ve done some touring this year – will you have more dates soon? Which is the best show you did so far?

December in Red: We’ve just started working with a new agent who is currently scheduling the next couple runs for this Fall.

We’ll be getting out on the road pretty consistently from there on out. The areas we’ve visited so far have been so great to us.

We’re excited to return to them to keep the momentum going and to continue to build our fan base. Also, getting to new places that we’ve never been before is always a huge priority for us. We’re really looking forward to all of that.

December in Red: We have a few unreleased songs that we’re still playing around with. These ones are next level stuff for us and we’re going to be chomping at the bit to get after them in the studio, even while we’re touring in support for The Way Out.

It’s important to always be creating material that keeps you excited and inspired to push yourself to keep getting better. 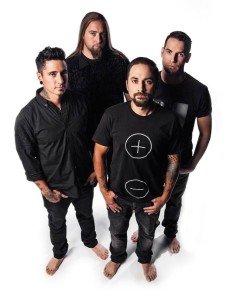 RYL: What’s your favorite rock song (because of its verses)?

December in Red: There are so many songs that I love because of their verses that it would be like asking which of your kids are your favorite.

That’s a quality that really draws me into a song and verse can be great for a lot of different reasons. Some of my favorites right off the top of my head are “Needles and Pins” by Deftones, “Goliath” by Karnivool, “Of Mind: Exile” by Tesseract, and “Fractured” by Taproot

RYL: What does the song “Don’t Look So Surprised” verses mean to you?

December in Red: We’ve lost a lot of people in the last few years due to things like overdose and suicide. This song is a tribute to them. It’s written from the perspective of someone in their last hours leaving remorseful words for the people they are leaving behind along with comforting ones.

It shows how consumed by their suffering they are in spite of how much love they have for their people. None ever really knows how much time they have left with anyone until there isn’t any left. This was the last song tracked for The Way Out and it came out organically in the studio.

I had a basic idea of how I wanted to structure my parts and a few ideas for the lyrics but that’s about all. I was able to spend that last day of the tracking phase late into the night working on just this song and coming up with the lyrics and melodies right there in the studio.