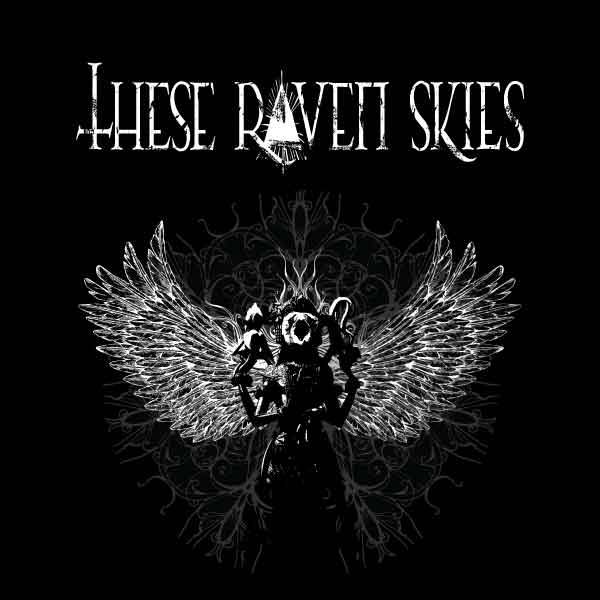 RYL: Your self-titled album was released two months ago, are you happy about the feedback you received from your fans?

THESE RAVEN SKIES (http://www.theseravenskies.com): The feedback has been absolutely amazing so far. We have a cult following that’s developing really quickly all around the world, with the biggest support coming form the USA and Germany so far! Our fans have been super supportive and so far feedback about our live show has been exceptional as well. – Alex (guitar)

THESE RAVEN SKIES: Each of us probably has a different answer to this question, but I love playing “Magick Waters” for the dynamics and power of the track and “No Need to Worry” because the fans always go crazy the minute we play the opening riff – Alex

I’d have to go with Emily and Alick; there’s a cool outro written for live performances. – Perkins (vocals)

RYL: Is there a common meaning among all the lyrics of the album?

THESE RAVEN SKIES: There is a common energy; It manifests itself through several messages, life experiences and  stories but the songs are independent lyrically. – Perkins

THESE RAVEN SKIES: It all starts with a melody and that turns into a syllable map so to speak. After I have that pretty much nailed down, I choose a topic, a person (living or not) a place, anything I want to get out of me or learn more about or even bring awareness to. I sit down with some whisky and cigarettes and study and write.

Being miserable helps too haha – Perkins

THESE RAVEN SKIES: The last song to come together on the album would be “The Garden”. It was a rough sketch when we took it to Australia with us for our recording sessions.

There were no drums, bass or vocals written for it – only the strummed verse and pre-chorus guitar parts. Issues back home ending up influencing the band’s overall mood and subsequently the track – lending to the fatalistic nature of the lyrics.

RYL: What inspired the song “No Need To Worry”?

THESE RAVEN SKIES: Our antics lol. “No Need to Worry” is based on a true story where the band was forced to clear out a couple unruly patrons in one of our favourite pubs / music venues back home in Calgary.

We nearly tossed out the drunken, bar fight lyrics, in favour of something a little more thoughtful, but we felt the concept was too fun to abandon! – Perkins

RYL: Do you remember the day you wrote “The Hooker”?

THESE RAVEN SKIES: Musically, no. Lyrically yes. I wrote it twice. Once for the demos and again when we went to Australia.

The demos were incomplete vocally, but the song was strong so Jeff Martin and I basically boarded up the doors of his studio and attacked “The Hooker” from all angles.

I fought for several parts to stay the same so those parts and the mind of JM turned the song into this strange story about a psychotic man in love with a prostitute. – Perkins

I definitely recall the day this one came to life. Trevor (bassist), Shand (drummer) and I were jamming on a couple ideas that had an old-school Verve vibe to it. It was really psychedelic along the lines of The Verve’s A Storm in Heaven era sound.

The track eventually morphed into the edgier version you hear on the album, but it still has some of the psychedelic delayed vocals and guitars in the final mix. – Alex

RYL: In your opinion, which is most difficult thing in doing music?

THESE RAVEN SKIES: The music industry has changed dramatically over the course of the last five years and a lot of companies are still trying to find their place in the new business climate.

It seems like there are more bands than ever competing for the same opportunities, so getting noticed can be tricky. – Alex

THESE RAVEN SKIES:  My all-time favourite riff that I’ve written would be the intro to No Need to Worry or the pre-chorus section of Emily & Alick. I love the pastoral feel of that verse juxtaposed against the southern gospel meets southern rock elements in the pre-chorus and chorus. – Alex

RYL: Tell us about “The Garden”, what inspired it?

THESE RAVEN SKIES: Musically “The Garden” was inspired by The Tea Party and some classic psychedelic tunes by the Rolling Stones and Jimi Hendrix.

I’ve always been a huge fan of classical Indian percussion and stringed instruments and “The Garden” seemed to lend itself well to incorporating some of those elements.

Lyrically speaking the song was inspired by, loss, homesickness and an exploration of spirituality through the lens of esoteric thought – Alex