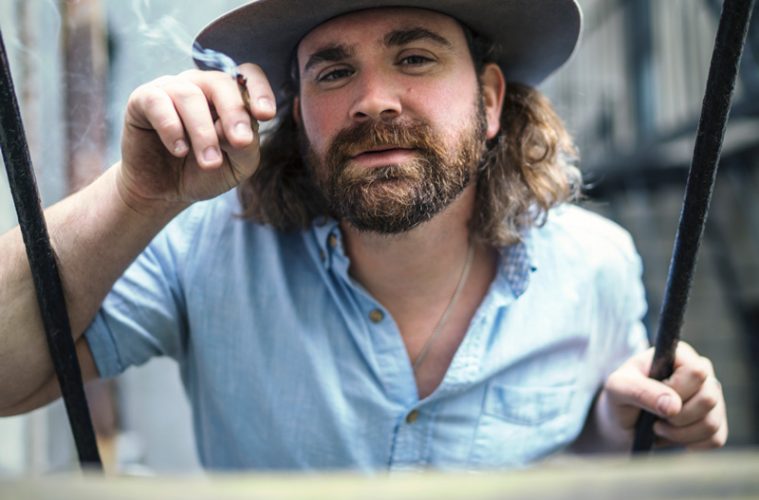 Songs typically come to me at weird times, so I start off by recording pretty much anything, even if it’s me just humming a melody, into the voice memo app of my phone. Then about once a week I’ll sift through and see if there’s anything good. My lyrics usually start from whatever comes out of my mouth, and then I spend weeks or longer refining the lyrics, sometimes scrapping everything and starting fresh. I’m never 100% satisfied with my final product, but I think all songs are changing objects in that sort of way.

I think the most important thing in songwriting is truth. Don’t write about something you don’t know. I always try and write about my own experiences and emotions in ways that will click with people. Speaking truth is a good place to start.

Of course. I’m scared just to play things for people. Sometimes people tell me they like my music, and I’m like, “Did you actually listen to the lyrics? This song is sad as shit.” But like I said, being truthful is what brings people to your music.

I’m not sure I can point out an all time favorite, but I recently released a song “Used To Be” and it’s got a lot of lines that move me. My mom and stepdad passed away about six years ago in a plane crash, and I’ve changed a lot since then, both for better and worse. There’s a line in the song, “would my momma’ rest in peace know who I am?”. I think my mom would be incredibly proud of the musician I’ve become, but also very disappointed in some of the ways I handled her passing.

What inspired “City That Saves,” part of your latest album “Things I Don’t See”?

Despite me telling myself I’d never write a song about living in New York City, you can’t really live here and not have it seep into your music. It’s really about the love/hate relationship I have with this city. It’s an amazing place for artists and amazing place to live in, but it’s also filled with a lot of ugliness and sadness. The first line, “writing love songs to a city that saves” really references that at the end of the day, despite my issues with NYC, it’s where I lived when I lost my parents and went through some of the hardest years of my life. It was NYC and the people in it which helped to bring me back up and see that life goes on.

This is a case where I started writing a song with purpose. I wanted to write a bar song about a girl, and this song and its melody are sort of the everyman song. It’s easy to remember, fun to sing, and has pretty straightforward lyrics. “Pour me a drink, as sweet as the sunset, as sweet as the day you were born.” I think everyone can get down with that kind of drink.

Do you remember the day you wrote “Used To Be”? Tell us about it.

Honestly, I don’t. It’s the second to last song I wrote for the record, so it’s less than six months old. When I wrote it I knew it would be my favorite song on the record. I think at the time I was really trying to write on a personal level, about my own feelings and emotions at that time. I felt like I had finally stopped chasing the dragon of being young, no longer wanted to be that cool kid that partied and went out all the time, and finally kind of started to dig getting older.

Is there a link/common theme among the songs of the new album?

The link will always be loss, change, and moving forward. All my songs in some way touch on the never-ending movement of time, change that occurs through life, and the suffering we all experience as a result of that change. Even Xanax, drugs & Whiskey, despite it being a funny song, is about a really dark time in my life where I was pretty much messed up all the time. I can look back on it now with a little humor, but it’s a part of who I am and I can’t forget that.

What is the best suggestion your producer(s) gave you?

Kenny Siegel is the man, and a great person to make music with. He’s worked with some truly amazing artists and I’m lucky he was interested in helping out with some of my tunes. The best suggestion he gave me was to work with The Restless Age. These are three guys out of Hudson Valley who are just absolutely amazing musicians. They make the song sound incredible, and I can’t thank Kenny enough for telling me he’s got the band covered.

Tour, tour, and more tour. I’d like to be on the road constantly for the next few years. I’ve been doing a lot of radio station visits and want to see this album ‘Things I Don’t See’ spin pretty much all over the world. Right now I’m headed all over the East Coast, but also looking to hit the West Coast, Texas, the UK and Australia by the end of next spring. I’d also love to make more money than I spend this year. That would be nice.