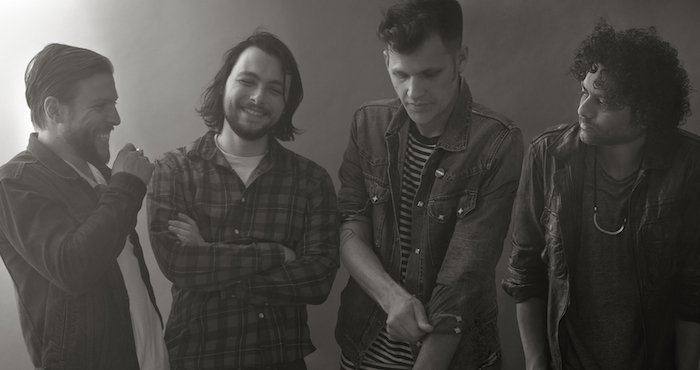 RYL: Your EP “Tidal Wave” has just been released, what was the main challenge that you encountered while recording it? What does the album mean to you, lyrically speaking?

Marco with Love: The main challenge we encountered while recording was the fact that we didn’t have a blocked out period of time to work on the EP. New York City is an amazing place to live and create, but due to the high cost of living, certain time restraints come in to play.

Everyone in our band has to work at least one other job in order to supplement income and pay our bills. Ideally we would all be together for an extended amount of time in order to complete the recording, but that couldn’t happen with this project.

Aside from the initial basic live tracking as a band in the main room, overdubs and mixing sessions were all done when pockets of time were available at the studio between shifts at the bar, after others got out of work, late at night, etc.

Lyrically speaking, the album isn’t just about one single concept. There are certain recurring elements that find their way into the words. In “Tidal Wave” it is an introspective look at oneself, but also shines a light on the problems we as a society are facing.

RYL: Tell us a little about the song “Poor Young and Gifted” and its significance.

Marco with Love: PYG is ultimately about removing the thorn in your side–that toxic poison a person can have on your being.

The main character has been tried and tested time and time again and his patience continues to be wearing thin. At one point the protagonist is reflecting on dealing with his own demons and the voices heard in his head only to realize that they have been figments of his imagination.

Marco with Love: Not all our songs share a theme. However there are some reoccurring themes that I tend to touch on from time to time. I suppose the majority of them share in the overall human experience. Life, love, death.

RYL: how do you usually go about writing the lyrics and music for your songs?

Commuting to NYC from Brooklyn I often write a lot of the lyrics in transit.

Every so often I will bust out my composition book, mole skin, or legal pad in order to write ideas, stories, or current events, but 9 times out of 10 these days I use the note pad app on my iPhone. It is really convenient and allows me to test out lyrics while listening to demos I’ve recorded into my phone.

I like to record these ideas as soon as I can, and then revisit them in various settings and states of mind, then on a different day I’ll re approach the same idea with a bit of a different feel or just elaborate on the previous one.

When I feel I have something more concrete I will demo the song using garage band on my macbook and multi track guitars, bass, vocals, and percussion.

This allows me to have a better outline of the tune and further understand the arrangement before bringing it to the band during rehearsals and before we head into the studio to cut it properly.

RYL: What is behind the (lyrical) verses of “Leave it Behind”?

Marco with Love: “Leave It Behind” is more of an auto biographical account of my families struggles early on in life searching for something more.

I chose to write about my parents leaving their hometowns in search of a better life. My mother left Kentucky in the 1960s and decided to try her luck in New York. Not long before that, my father and his family packed up everything they owned in Southern Italy (Maida, a small village in Calabria) and headed across the ocean to NYCin search of the “American Dream.”

Similarly, after living in Florida my entire life, one day I decided I needed a change and moved to New York as well – landing in Brooklyn a few years later to take a chance on love. Overall the song is about following your heart, taking chances, and not letting other people tell you how to live your life.

RYL:  what is the best verse you’ve ever written (lyrically)?

Marco with Love: That’s a tough question because lyrics are meant to be subjective, but at the moment I’m partial to one ofthe newer songs, “Big Black Dog,” which should see the light of day this fall.

Often times in my writing I mask the lyrics and shroud them in metaphor, but I’m finding that some of my best work comes out when I’m honest and speak my mind. These newer lyrics are a reflection of that. In “Big Black Dog,” the lyrics include: “Every time I read what the papers say, another life is stolen every day. Don’t sleep on it now, just think for yourself. How does it feel?” I started writing this around the time of Ferguson uproar and the Michael Brown shooting, but as time went on and the song developed, I realized it was applicable to so many other race-related tragedies involving police brutality that have swept the nation.

It’s an important issue that needs to be discussed. Some seriously fucked up shit is happening and it needs to stop.

RYL: will you be touring soon?

Marco with Love: I would honestly love to tour again and look forward to that next opportunity to hit the road for a while. Right now we are planning some dates for the west coast, followed by a couple East coast shows around New York and Nashville and a few gigs up in Toronto, Ontario.

RYL: Do you remember the day you wrote “Tidal Wave”?

Marco with Love: Yes of course. Tidal Wave hatched during one of the first jam sessions I had with Subodh Samudre.

It was a weekday evening and took place at his Williamsburg rehearsal space on Roebling and Hope street in Brooklyn.

The riff that ended up being Tidal Wave’s verse was an idea that Subodh had been kicking around for a bit on the bass—it had a fun groove and we instantly started developing the idea further.

I came up with some melody lines to accompany his riff,and we knew right away that the song had potential.

I recorded those sessions and sat with them for a few days adding the intro piece that fit well with the original idea and not long after that we met again to share the idea with Pete and Blaine.

The guys thought it was still missing something so we kept beating the song over the head until those beautiful chorus chords appeared.

You have to remember that this was still the first original song that we had worked on together for this band. I still remember how excited we got when Blaine came up with the bridge pedal steel solo, holy shit! We knew we had truly come up with something special at that moment and to this day it’s still so much fun to rock out to when that part comes up! It’s psychedelic, it’s insightful, and most importantly it’s Rock N’ Roll, Marco With Love-style!