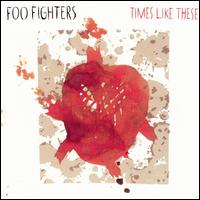 It is  1994 the year Kurt Cobain died leaving Nirvana band members totally astonished and uncertain about their future.

Dave Grohl, the drummer of the band, decided to go to Europe for a while and upon his return in Seattle, funded the Foo Fighters.

At the beginning he was the only member of the band (since he was capable of playing all the instruments), then he decided to “hire” the drummer William Goldsmith, the bassist Nate Mendel and the guitarist Pat Smear that played with him in Nirvana.

All together they recorded the first album: Foo Fighters

Several members of the band changed with the years, the last band members were: Dave Grohl, Pat Smear, Chris Shiflett, Nate Mendel and Taylor Hawkins at the drums.

Recently Dave said that the Foo Fighters will take a break, we hope they will come back soon….

Times Like These is  the second single from the album One By One, the fourth one of the band , and best seller with over 2.000.000 copies sold.

Dave wrote it thinking about the difficulties in the release of the album; in fact he was not satisfied about the results obtained during the production.

The band members reached the point of not talking between each others or, when they were doing it, the conversations were ending up in fights.

In “times like these”, where everything looks dark you “learn to live and give again”.