Tom Grennan has announced his biggest UK headline show to date at London’s Alexandra Palace for 30th September 2021 – a landmark gig at the iconic 10,000 capacity venue. Tickets are on sale from 19th February with exclusive fan pre-orders available from 17th February via Tom’s official online store. 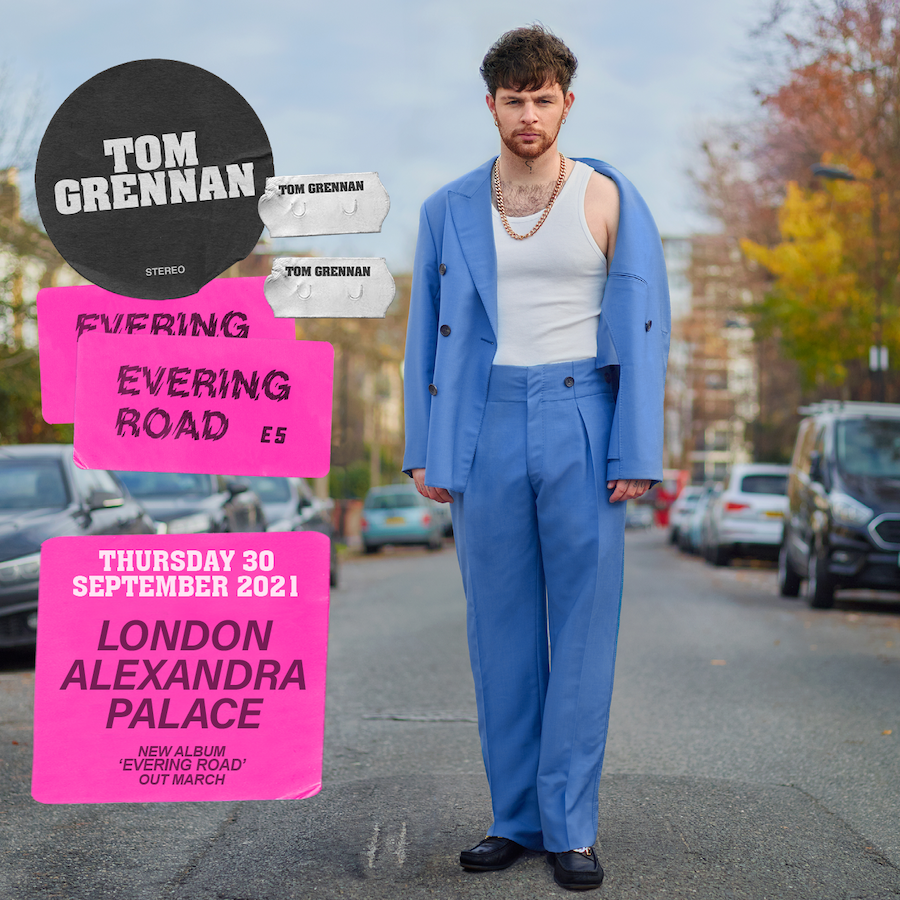 Tom says: “I am BUZZING to announce my biggest ever headline show yet! I’ve missed playing live so much, it’s going to be so special to get on stage and connect with my fans again. Alexandra Palace, let’s do this!”

Tom’s headline show at Alexandra Palace will celebrate the release of his highly anticipated second album, ‘Evering Road’, due for release 5th March via Insanity Records.

October 2020 saw a full circle moment as Tom headlined London’s O2 Academy Brixton for a second time. Through the lockdown, Tom has continued to use his platform and voice to give back to his community, promoting positive mental health through acts of kindness. Recently announced as UK face of Tommy Hilfiger’s ‘Moving Forward Together’ campaign, Tom’s lent support volunteering with Bedford Foodbank, launching a virtual support group for fans on social media, and running 100K for War Child’s ‘Peace Band’ to raise awareness for children living in conflict.

Named after the East London address Tom shared with his then-girlfriend, ‘Evering Road’ is a hub of love, heartbreak and redemption. A bold and exciting new chapter shot through with raw emotion and searing honesty. The album is set to include single ‘Little Bit Of Love’, currently Radio 1’s Track Of The Week and Radio X’s Record of the Week, ‘This Is The Place’, the soulful ‘Oh Please’, gospel-tinged ‘Amen’ and new anthem for hope and optimism, ‘Something Better’.

‘Evering Road’ marks the anticipated follow up to ‘Lighting Matches’, Tom’s breakthrough album that cemented him as one of the UK’s most vital and exciting new artists, and one of the Top Ten best-selling debuts of 2018. A Top Five UK Gold-certified record, ‘Lighting Matches’ has amassed over a quarter of a billion streams, seen sold out headline shows at The Royal Albert Hall, O2 Academy Brixton and won over thousands of fans at festivals including Reading & Leeds, Isle Of Wight, TRNSMT, Latitude and a host of other events.