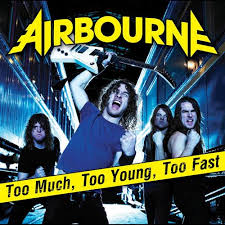 Too Much, Too Young, Too Fast – Airbourne

You certainly know the Australian Hard Rock band called Airbourne, if you don’t you can’t miss one of their most famous song : “Too Much, Too Young, Too Fast” released in their debut album “Runnin’ Wild” in 2007.

The lyrics focus on Joel O’Keeffe’s (singer of the band) dissatisfaction with the state of modern society.

The song attacks bankers and define them as “street gangs and mad men” , what they do is like “private wars”.

“The eye in the sky” is about the big eye that follows all our moves  and the paranoia that this then causes.

In the chorus, Joel affirms that “if it’s the end of days, I’m going out in style”, he wants to enjoy it all before it is too late….. CARPE DIEM, Seize The Day…