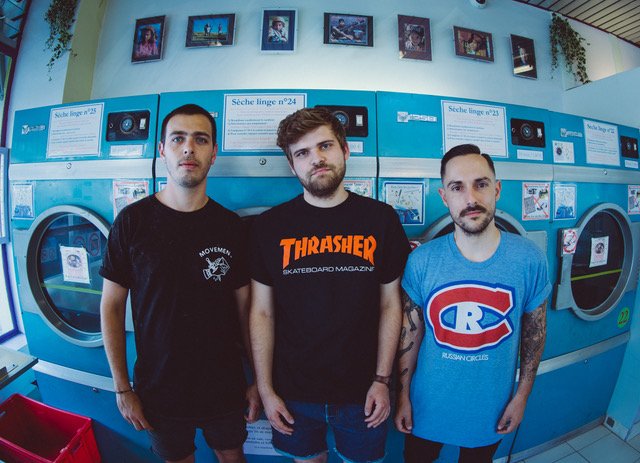 How do you usually write the lyrics of your songs?
We don’t have a proper method to write our lyrics. Most of the time, we are composing vocal lines and melodies before writing lyrics, but it could happen that the instrumental inspire us a theme or an ambiance so much that we write the entire lyrics before trying to find any vocal melodies.

In your opinion, what is the most important thing in songwriting?
To be patient, and to avoid forcing yourself composing when it’s just not the moment to do it and that you don’t really feel it, get some vibes. Cause you’d just write shit songs and never be satisfied of it. Every good songs I wrote and that I’m still proud of, have always been composes in a particular mood, in a state of mind, most of the time in a bad mood. I can deny that I feel very inspired and creative when I’m so down, defeatist or angry af.

Are you ever scared of revealing aspects of your personal life/experience to strangers through your music?
Less and less. This is linked to what I just said for me. The ability to write something personal could definitively contribute to make a great song for me. It just sounds so real, so sincere. So the listeners  are more receptive and feel that sincerity. They can easily identified themselves.

What is the best lyric that you ever wrote (the most meaningful for you)?
Really hard to choose. I have three favorite songs that get meaningful lyrics for me. The first one is called “A Lack Of Time”, I composed it for my band Jean_Hub. The title speak from itself, this is talking about the passing time and the desperate feeling of not being really able to change anything. The second one is called “Snakes & Sharks” composed while I was in Sail To North. This is talking about my wish of leaving an area that was starting to be toxic. This is the first time I dared to blame my mother for the pressure she was putting on me during this period. Hopefully this was just a period of time, everything is totally ok between us now, we still love each other bla bla, but the fact that I moved to Paris shortly after, make the lyrics really powerful as I figured out my desire to escape became totally true. The last one is called “Gold”, I released it by my own, and is a cry of anger addressed to my best friend. Because we kind of part ways and I really resent him because I’m taking it for a treason. The second part has some fatalistic and nostalgic vibes, and I’m then talking about the fact I consider we are both at fault, and that I’m also responsible because I’m not talking anymore and that time and life make me less communicative and interesting . It’s a kind of Adieu to my old friend, the burial  of my teenage years, like I would never see again the funny buddy I used to know.

What inspired “Glass N Sparks”, part of your debut album “Too Slow”?
Well this one is totally fictive. We find the theme when we wrote the instrumental, it has so much melancholic, violent and sad tones in it, that the theme of a lost love in a dramatic event came quickly in our mind, It’s talking about a guy who lost his girlfriend in a car crash, but nothing except our imagination really pushed us to this story.

Is there a link between all the songs of the new album?
Some themes like love, sadness, nostalgia, melancholia, anger, fate are recurrent. There is no real link between all the songs except between the songs “Glass & Sparks” and “Eleanor”, both talking about the same story i.e. a fictional car crash. Eleanor is the name we gave to the girl that died in the accident, and her personal life is a bit more developed in the song that carries her name, while “Glass & Sparks » describe the story of her boyfriend who survived.

Who produced it?
I compose the basic structure of the songs, and then we rework the whole thing with Clem and both compose the vocals and lyrics in the same time. Then Joe rework the drums for to bring his groove and personal touch. I record the whole thing and mixed and mastered our first song ever as a band “Tiny Rascals”. I can’t do the mix/ master of the whole album as my job and personal life does not offer me enough time. So we are totally confident in the work of our good friend Momo (lead singer of In Other Climes)that is currently mixing and mastering the whole abum.

What are your plans for 2019?
Release the album and play some shows !!