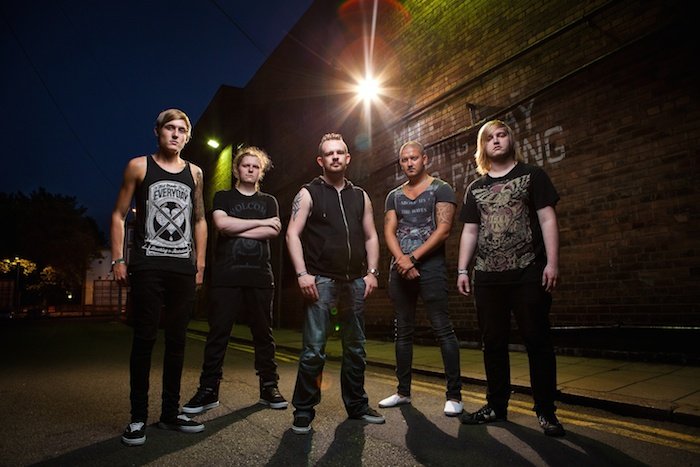 RYL: Tell us about your last EP, when it will be released?

Patriot Rebel: Our last EP was called ‘Two Worlds’. It was a 6 track EP which was released late 2013 and was received really well

RYL: Let’s talk about the song “Propaganda”, what inspired its verses?

Patriot Rebel: It was written about an old work colleague of mine who would always try to belittle the younger lads and shit stir just to cause trouble.

So Propaganda was my way of looking at it. People generally presume its war related but it’s not in the slightest. Although it’s good that some people take out of songs what works for them.

Patriot Rebel: No, each song is written on its own particular subject. Mainly based on personal experiences and feelings toward various things in life

Patriot Rebel: Music is usually a case of one of the guitarists coming up with a few chords and riffs.

Then when the band get together we structure it and maybe add or remove bits to suit until we have something that we’re all happy with.

Usually after that we add a melody and lyrics. It’s not often that lyrics are done before the music but it has been known to happen that way.

Patriot Rebel: It’s difficult to say because each member probably has a different favourite depending what mood were in at the time.

Even though the lyrics are written about a subject specific to the songwriter, people can take their own meanings from the same words. Propaganda is a perfect example of this

Patriot Rebel: If you don’t enjoy doing it there’s no point. You have to enjoy it first of all.

RYL:  You will tour soon? Which is the best show you did so far?

Patriot Rebel: Yeah we will. We are working on new material at the minute so when that is finished we will be hitting the road to show it off.

Again not sure we can pick a favourite show because they’re all good for very different reasons. Having said that, headlining the famous Rock City in our hometown of Nottingham will always special.

Patriot Rebel:The most recent song we’ve written is called ‘Digital Mannequin’ and will appear on our next EP

RYL: your favorite rock song (because of its verses)?

Patriot Rebel: We all like such different music individually that its impossible to say a song that we would all agree on.

Tastes vary so much. Which does create some very ‘interesting’ debates from time to time yet helps us no end when it comes to making our own music.