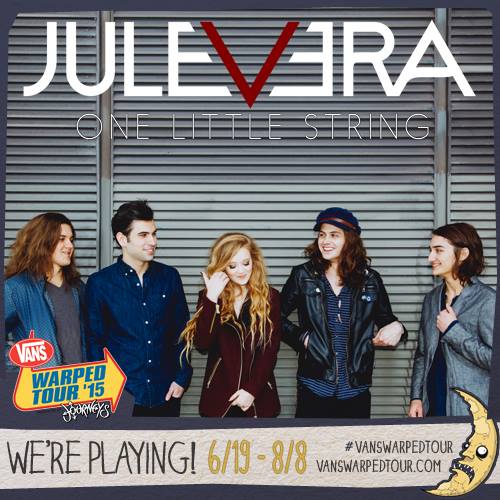 RYL: Great News! You are going to play the Warped Tour this summer! Tell us about what is going on in your mind, how do you plan this important moment in your career…

JULE VERA: Will:I don’t think it’s still really hit me. I’ve been wanting to do this since I was like 13. It’s pretty surreal!

RYL: Do you remember the day they confirmed you were selected to play?

JULE VERA: Jake: Ansley, Will and I were all at home when our manager called me about it.  Will was writing a song outside and I ran out there to tell him and then found Ansley on the phone and told her. We were all super excited since it was our first “real” tour!

We immediately started freaking out and brainstorming everything for the tour.

JULE VERA: Ansley: Usually a song starts out as an idea by one of us, and we finish the song together. Sometimes we’ll come up with a good lyric while playing an instrument, sometimes in the car, or even working on a different song.

JULE VERA: Ansley:Maybe, “Poisonous words give you away, like you’re wearing a Scarlet Letter.”

RYL:  What inspired “One little String”?

JULE VERA: Ansley: The song is inspired by the way people used to tie a string around their finger to remember things. We used that idea in the story of a relationship where the couple is separated from each other, and the girl wants him to come back. She doesn’t want him to move on and forget about her.

So the string is a reminder to remember her while they are apart.

JULE VERA: Will: Well it’d have to be a song I don’t already have. Probably that new Maine song “English Girls”.

RYL: what is the most important suggestion you received?

JULE VERA: Jake: To focus on the songwriting and that it’s always the most important part.  Not to worry about the instrumentation or how the guitar is going to sound until after you’ve made the song the best it can be.

JULE VERA: Jake: We’re going to have to go with Bohemian Rhapsody by Queen. The songwriting is incredible, and the creativity and emotion they put into the recording is awesome.

JULE VERA:Will: I think the craziest thing I’ve done was at the 2012 warped tour when I was really into We are the In Crowd. I had the biggest crush on their singer Taylor Jardine, so I wrote “Marry me Tay” on my chest and got on my buddies shoulders.

Ansley: Summer 2013 we played a show at six flags over Georgia and that day, we played 4 sets of the exact same show at different times throughout the day. the first set was pretty empty except for a few girls that stayed through the whole show. we met them afterward and talked to them and then they left. the next set comes along later that day and the same girls show up with more people.

They came and watched the exact same set 4 times that day, each time bringing more people to see us. It’s not exactly a crazy story, but it was really sweet of them to sit there and watch the same 30 minute show in the blazing heat 4 times!