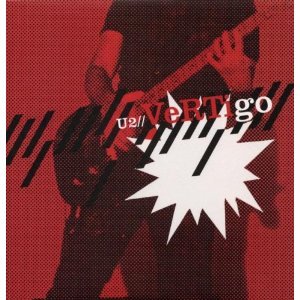 Killing Bono………it is a great book by Neil McCormick that is telling the story of U2 at their beginning…..the author is playing with the rivalry between his bands and Bono’s…… but there was no rivalry , they were just friends that had different success…….the one of U2 was the one to become legend with over 150.000.000 copies sold.

For more information related to the band you can visit our previous posts: Sunday Bloody Sunday and In the Name of Love, Pride.

Pride (in the name of love)

“Vertigo” was released in 2004 as part of ” How to dismantle an atomic bomb” album that sold , during the year of its release, over 10 millions copies.

Did you know that the Edge’s copy of the album has been stolen before its official release? A lot of uncompleted songs were included there….the Band immediately said that if somebody was releasing it in internet they would have published the album in 24 hours…. nothing happened but still the theft was quite big.

Vertigo is one of the most favourite song of the band, it came from an idea of Bono after that he had to re-write the lyrics twice.

In fact, before being called Vertigo, the song was named “Full Metal Jacket” and “Native Song”……in both cases the lyrics were different than its final version.

Edge would have said that Vertigo is enough of a reason to produce and publish a new album.

The song talks about this bar/club called Vertigo, where everything is spinning around, people, places and music…..suddenly a girl appears in the scene…….she is just a normal girl…….with a cross on her neck….is that cross that stabilises the Vertigo……is that cross that saves the man.

Is a song about strong values in life compared to what is happening all around us…..

Apple used the song for the commercial released of its iPod….. but the song didn’t need extra advertising, it was already destined in becoming a huge success….