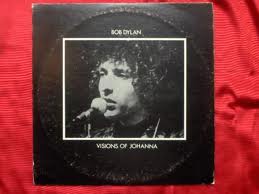 Blonde on Blonde is the title of the album, released in 1966 by Bob Dylan that includes, among other successes, Visions of Johanna.

Initially the song was written in 1965 and titled “Freeze Out”, but then later changed in its current title.

It is considered a masterpiece of songwriting (for Bob, but also in general) and it is one of the top 50 Rock and Roll songs ever written.

Its lyrics are extremely dense of meaning and not really easy to interpret; for sure Johanna is Bob Dylan’s muse (like MonaLisa for Leonardo Da Vinci) the kind of woman he is in love with.

But,apparently, Johanna is not Bob’s wife (that was pregnant while Dylan was composing the song), she is another woman; in the picture enters also Louise, that is different than Johanna, she is more carnal.

Lousie is amazing, hot, everything you can desire, but she is not Johanna, she doesn’t have that “romantic” side that makes Bob falling in love with her.

Everything starts in a room in NYC (probably the famous Chelsea Hotel, where Dylan was staying at the time of the song) and finishes in a surreal environment.

Is this “surreal” environment that inspired other interpretation of the song….

Some people says that it is about two powerful and dangerous drugs, Heroin – Johanna and LSD – Louise, Bob, according to these, would have used LSD to forget Heroin and started a journey in his mind (the museum) between things that he remembers and things that he forgot.

Bob never answered clearly to the real meaning of the song, most probably both versions are correct.

What is your version?