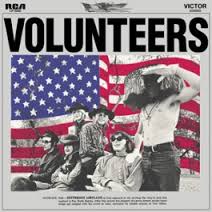 One day you wake up and you find something written on a wall…..you decide to write it down and rapidly it becomes one of your most famous success and also the title of your album…….

This is what happened to Marty Balin of Jefferson Airplane, he woke up one day and he found on a wall the words “Volunteers of America” (association that provides assistance to homeless people in US); he suddenly started, with the help of Paul Kantner to write “Volunteers” .

This song was released in 1969, a couple of months before the album with the same title was released.

Obviously the song is not dedicated to support this noble association, but it is related to the anti-war and anarchist generation that lived the end of the sixties and the beginning of the seventies.