RYL: Your new single is called “War Hero”; do you remember the day you wrote it?

ROB DECOUP: I actually started writing it around 2003 and it only got completed lyrically recently. It kept getting edited up until the last minute before vocal recording day in the studio. 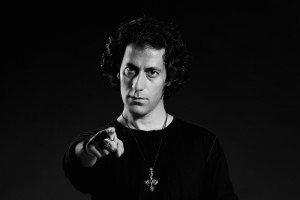 ROB DECOUP: I don’t have a paradigm or system that I always use. It varies every time, but usually the lyrics come at the end, or are finalized at the end. When I decide to have rhymes in the lyrics, I think of the ending of each sentence first, and then try to work backwards and come up with the beginning. I do experience blocks once in a while and for me Red Wine does wonders.

RYL: Your new album will be released in January 2015 “Rays of Sun”, is there any link between all the lyrics of the songs?

ROB DECOUP: Not Really. It’s a collage of songs that are political and revolutionary, anti-establishment and non-conformist; “Run Away” “Sleeping Slave”, “Don’t take my Gun” and a few good old high energy rock party songs like “Roll” and “Give”. “Anastasia (I want your soul)” is a dark love story with occultist undertones.

ROB DECOUP: Well its difficult to define “best”, as I personally find mysterious and confusing poetry and lyrics more appealing while others want a clear message and profound moral story of sorts. I guess I’m kind of proud of the revolutionary song: “Run Away” where I think I came up with some good lyrics that sum up the anger and rebellion against the exploitation of the people by the elite:

“We can’t lose cuz we got the numbers, they can’t win cuz they need us alive, For the fields and crops to thrive, are they ready for a spit in the eye, No no we are not insane, we are only getting sick of the game they kicked us down till our minds went sore and then they left us out on the open shore”

“Angels of fortune wear Satan’s clothes; they walk a thin line of thunderbolts”

RYL: Tell us everything about “Burn me to the ground”

ROB DECOUP: “Burn me to the Ground” was a song I wrote in 2003 in the aftermath of 9/11 and the Afghanistan/Iraq wars. The song was on the shelf for a long time, and only recently I decided to complete it lyrically and release it.

The Zeitgeist of Islamist terror and the beginning of the end of our civil liberties were among the influencing factors.

In retrospect, we have evolved towards more government control and less individualism with an Orwellian grid society on the horizon. The song resonates non-conformism, anti-consumerism and the fight against tyranny and institutional mind-controlling religion. Generally the song seeks to bring awareness to the exploitation of the people by the ruling elite, told through the perspective of a prisoner (the modern 9-5 cubicle slave-consumer) seeking justice and vengeance for the theft of his freedom. Refusing to believe in the “book of lies”, that sells us the illusion that we have to accept our fate, and that there is no other alternative… But there is.

There is another way, and Rock music can be the head of the spear with its roots in blues music stemming from oppressed African-Americans in America. They can beat and jail us, even eliminate us, but the spirit of resistance will live on. “Burn me, start from my head, but you can never shut me down”!

ROB DECOUP: “Japanese Soldier”, exploring the side effects of self-hypnosis and sudden awareness of past-life lessons and memories in thousands of years of reincarnation.

ROB DECOUP: It’s about the relationship (or clash) of a generous man and a self- righteous woman obsessed with drugs.

RYL: You play guitar since you were child, which is the best one you ever owned?

ROB DECOUP: I love all my guitars, the first one was obviously most influential, it was a simple no brand acoustic.

RYL: What people can do to end war? What Music can do?

ROB DECOUP: People can do a lot, even small things like emailing their senator and congressman, signing online petitions to attract the attention of the White House. But also actively protesting. Let us not forget what actually brought an end to the Vietnam war was massive anti-war protests in the US. Music can be a driving force, artists need to emphasize on the devastation and foolishness of war in their lyrics.

This is why it’s so important to keep rock music alive, as there are no lyrics in electronic music and pop music mainly rotates around shallow and joyous lyrics.