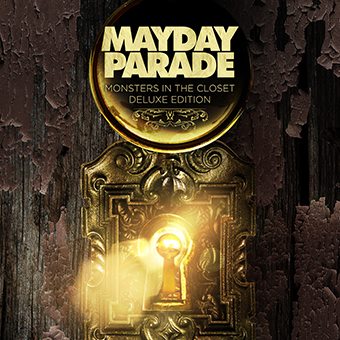 Derek Sanders, singer of Mayday Parade, answered to our questions regarding their upcoming summer tour and the lyrics of some of their most famous songs.

RYL: Summer is approaching and you are back to Warped Tour, what does it mean for you? How do you feel about 2014 edition?

MAYDAY PARADE: I don’t think I’ve ever been this excited about a tour before. There are just so many things to look forward to. It’s our first time playing the main stage and there are so many good bands and people on the tour. It will be amazing

MAYDAY PARADE: When I write lyrics I take my time and write them over a long period, usually just running through song ideas in my head and writing bits and pieces as I go. I never want it to be forced, it should come naturally and if I ever have a hard time coming up with anything I don’t worry about it and come back to it later

RYL: When you wrote your last song? What inspired it?

MAYDAY PARADE: I’ve been writing a lot of songs lately, they’re inspired by a whole range of things. Usually about real life experiences and growing up, love and loss, things like that

RYL: “Miserable at Best”, part of your debut album in 2007 (“A lesson in romantics”) is the fans favorite in ITunes chart, why in your opinion? Do you remember when you wrote it?

MAYDAY PARADE: Our ballads have always been some of our strongest songs, that one just has always been a favorite. I think that song is just very emotional and people have been able to relate to it

RYL: Your last album “Monsters in Closet” was released in 2013, our favorite lyrics are the one of “Even Robots need blankets”, can you tell us what inspired them?

MAYDAY PARADE: Thank you! That song is inspired by family life growing up and how much people change

RYL: Obviously we also want to know everything about “Ghosts” ….. 🙂

MAYDAY PARADE: Ghosts is mostly about the things that haunt you in your life and how you deal with them.

RYL: 2014 is the 9th year of Mayday Parade, are you preparing already the celebrations for next year? 10th anniversary….

MAYDAY PARADE: We haven’t had any conversations about it! We might try and do something special but it’s hard to say at this point. It is very exciting that we’re about to hit a decade of being a band, it’s a pretty big milestone for us

RYL: Which is the verse of one of your songs that is you like the best? Or, at least, closer to you?

MAYDAY PARADE: I’d say the lyrics to “Without the Bitter the Sweet Isn’t As Sweet” are probably my favorite. It’s hard to pick an exact verse or part but there are some lyrics in that song that really mean a lot to me

RYL: Last curiosity… how have you decided the title of “The torment of existence weighed against the horror of now being”?

MAYDAY PARADE: That’s actually from a Calvin and Hobbes strip where Calvin creates snowman art and titles it “The Torment of Existence Weighed Against the Horror of Non Being.” I just love Calvin and Hobbes and this quote in particular