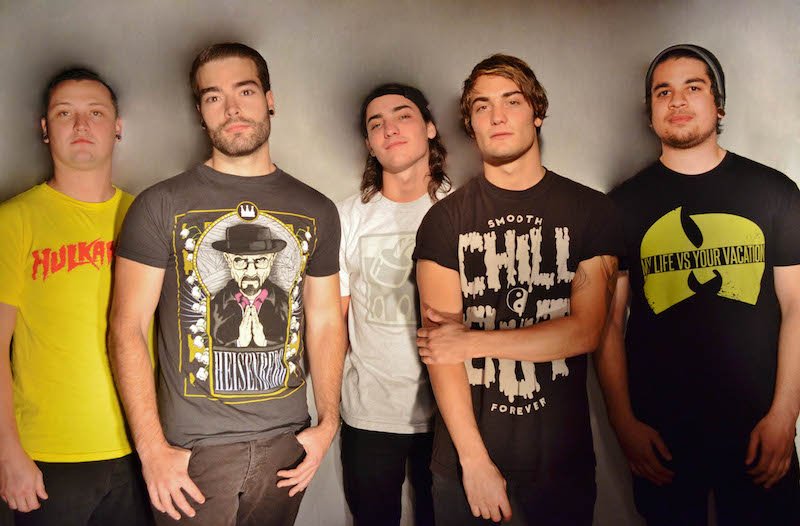 RYL: in 2013 you released your last EP “ Do what’s best for you”; what its release means for you and, now, would you change something in it?

BOYMEETSWORLD:  This was our first ever “release” and it means a ton to us.  We’re super proud about it.

It’s where we started, and it will always be amazing to look back and reflect on how we’ve grown since then.

RYL: Are you planning to release a new one soon?

BOYMEETSWORLD:  We are actually releasing our debut full length album this June, right before we hit the road with the Vans Warped Tour.

We’re so stoked on this release and think that we can do big things this summer.

BOYMEETSWORLD:  I like to write songs based on past experiences, and things I’ve went through personally – so I guess you could say that’s the inspiration.

RYL:  Do you remember how the lyrics of “Girl in Front” have been written?

BOYMEETSWORLD:  I wrote the chorus melody and lyrics just randomly, and not really about anything or anybody specifically.  Then based the rest of the song about guys that are tied down to girls that are no good for them, and become absent from their guy friends because of it.

BOYMEETSWORLD:  It really always varies… Sometimes I write a melody in my head, then put lyrics to it before writing any music, and other times I’ll be messing around on guitar and play a cool riff then write from there.

I’m constantly thinking of lyrics and melodies in my head, it sort of drives me crazy sometimes, haha.

RYL: what does the lyrics of “Head Up High” mean to you?

BOYMEETSWORLD:  Head Up High is sort of our “Stay Strong” or “Have Hope” anthem, and it means a lot to us and our listeners.  It’s nice to have a reminder that life gets rough sometimes and to keep going no matter what.

RYL: How “Right where we belong” has been written?

BOYMEETSWORLD:  Right Where We Belong was the first song I ever wrote for this band, when I was a freshman in college.  I think the chorus speaks for it’self, and is our real anthem and what we stand for as a band.

Have fun, and enjoy these moments while you can.  It’s also such a blast to play live.

BOYMEETSWORLD:  I really like verses one and two of Rest Of Our Days – track 3 of our full length.  They’re similar, but show the contrast of how when we were young all we wanted was to grow up, but now that we’re older, we reminisce about the times we were young.

Verse One: “Take me back to the sleepless nights, a year or two ago, when everything just felt so right.  (But we wanted more) We’ll drive right out this town as fast as we can, no one can hold us back, our pride will go untouched for now”

Verse Two: “Take me back to the sleepless nights, a year or two ago, when everything just wasn’t right.  (But we had it all) Under disguise lied comfort ahead from what we swore was cursed – ahead was nothing but the worst.

BOYMEETSWORLD: I can’t even recall the last song we wrote because Ryan, myself, and Eric at moonlight studios finished up the last three all together.

RYL: you are going to play the Vans Warped Tour!! Great news! What are you planning for your fans?

BOYMEETSWORLD:  Thank you so much! This is something we worked so hard for last summer as the ‘catering band’, and we’re too excited to be on the actual roster this year.

For one, we’ll be out and about all day long promoting, talking to people, etc.  so you’ll see our faces a lot, and we won’t be in our beds all day(except for Brad).

As far as our show, we’ve bringing the energy like we always do, and we’re bringing it hard 😉  We’ve also been planning some signings this summer at the My Life Vs. Your Vacation tent, and now hopefully the Music Saves Lives tent.

We believe in a lot of fan interaction, so please, if you’re reading this and you’ll be at Warped this summer, come talk to us!