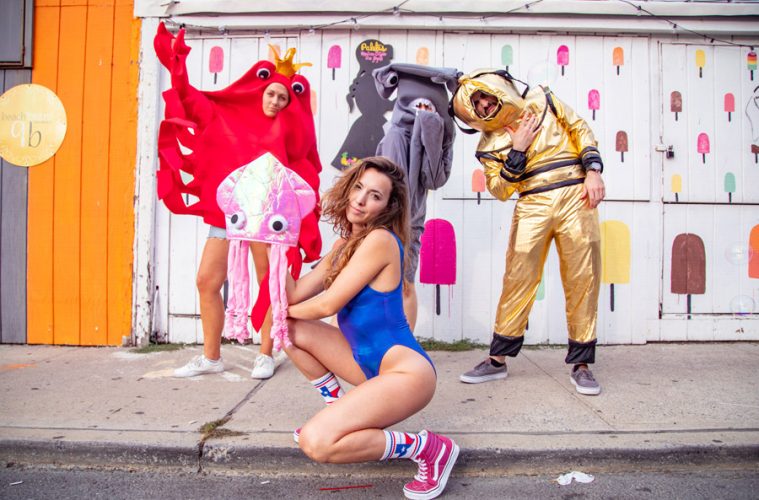 Sometimes I write lyrics first like a poem and then find a melody for them but more often than not, I am humming a melody first and then lyrics seem to free flow with that melody. It can start with general vowel sounds that feel like they match the melody and then I find words that have those vowel sounds.
So far in my experience, nothing has been intensely thought out or formulated in the way I write songs. The lyrics and melody just happen, pour themselves out of some weird subconscious place and seem to sort themselves out pretty quickly. If the song is missing a bridge or verse, I find it best to just let the song rest for a while…could be days, months, years but whenever I do come back to it and I’m fresh, I’m usually by then in the right place (emotionally, spiritually, physically) to fill in the missing pieces.

To let go; I never know what the song is meant to be until I give up control and just let it emerge. Nothing creative seems to ever turn out as I might expect if it is worthwhile in the end

My music is a good mix of fact and fiction and I don’t mind revealing myself through music. When I’m revealing through performance or recording it feels right because I’m expressing who I am in a way that feels right with my soul….
Ask me, though, if I’m ever scared of revealing myself through social media/the internet in general…. and that’s a different answer! hah!
What is the best lyric that you ever wrote (the most meaningful for you)?
Originally, ‘Girls Like Me’ had a third verse and it was this:
“Little hearts and scared souls
Won’t pave the path the path on which I wanna be
With girls like me
All that’s happening all the time
That leaves us all numb and blind ain’t for me
Or girls like me”

What inspired “Girls Like Me,” part of your upcoming album “Water Theory”?

Lyrically, it had to do with the people I was surrounding myself with at the time. A lot of “friends” and people I was working with lived very safe and maybe even scared lives. I can’t remember if there was any particular moment but in general I know I was just coming to terms with what my true values and opinions were and what I wanted for my life… Realizing that my dreams were starkly different, “out there” and more ambitious than many of the people around me.
When I signed on to work with Ernesto Valenzuela to produce the album, ‘Girls Like Me’ wasn’t on the original track list. When another one of the tracks wasn’t really working, we decided it would be best to replace that track with something new. I almost instantly thought of ‘Girls Like Me’ and began working on a demo. When I showed him my idea for the song, he was immediately down with it and we were running wild with ideas of how to take the direction.
‘Girls Like Me’ was our creative breakthrough; the song where we had no expectations, did whatever felt right, learned HOW to work together and realized just how well we work together. It was an inspiring experience overall and truly made the track what it is.
And “Lost At Sea”?
I wrote ‘Lost At Sea’ in about 20 minutes. It was several years ago, when I was living in Manhattan in my senior year of college at Pace University. I got home from a first date feeling heartbroken, not because the guy rejected me but because I knew I would have to reject him. He was nice, good looking, well mannered and it seemed like there were millions of reasons why I should’ve liked him but I couldn’t stomach it and had no idea why. The confusion made me really sad and prompted me to write ‘Lost At Sea’ when I got home from the date.
Now, years later, I realize that it was because I really loved being alone and liked figuring out life on my own. At that point in my life though, I couldn’t accept that about myself because it seemed wrong? rude? I’m not sure. Either way, I’ve fully embraced it now and know that the sentiment of ‘Lost At Sea’ will always be a part of me no matter who comes in and out of my life in friendship and love.
A blog post on ‘Lost At Sea’ when I released the demo a couple years back: http://www.lorenaleigh.com/single-post/2017/09/08/Lost-in-love-lost-in-life-lost-at-sea

Do you remember the day you wrote “Follow You”?

Yes, ‘Follow You’ was over the course of a few different days during my Eurotour last fall. First conceptualized when we were in a friends incredible apartment in Amsterdam with sunlight streaming through the windows that overlook the canal. I was sitting at the dining room table working at my computer, while my producer and friend, Ernesto, was across the room tinkering on the grand piano. Ernesto was plunking out that beginning piano riff over and over again and just like we always do… he got into a rhythm of playing, so I started humming along gibberish lyrics to create a melody. As Ernesto began to change up the chords, I’d follow along and change the melody accordingly. At that point it was just another random idea with no intention of seeing it through.
Fast forward to a week later, we’d played all of our booked gigs and were headed to Germany with intentions to busk the major cities. I’d come down with a gnarly chest cold so we decided to avoid the cost of staying in Hamburg and instead found a quaint little AirBnb outside the city in a small town called Hoisdorf. The AirBnb was listed as a “cozy cottage in a park” and that’s exactly what it was. I was feeling miserable when we arrived but the cozy cottage soon became an oasis for deep sleep, healing and inspiration. Our host, Moritz, was like a kindred spirit to us all. We exchanged tales of travel with him and realized our shared love of adventure. We drank infinite amounts of tea, played board games, ate food from his garden and frolicked through the backyard, which was an apple orchard.
“Follow You” is a spot on energetic expression of exactly what we all were feeling. A combination of everything that had lead up to that point in time. On our last night there we stayed up till 3AM writing and recording with the minimal equipment we had. It felt so totally random at the time but now looking back I believe it was divine.
A BTS video I made of how the song and video came to be:

The name of the Album is ‘Water Theory’ and most of the songs either literally mention or are thematically based on water. We also used synths, sounds and FX all to do with water.
The theme of the album is the idea of collective consciousness and how it is represented, and maybe even enhanced, by water. Water is connected, we are all part of it, pulled by the moon like the tides and whether I jump into the ocean in Thailand or New York City, I’m jumping into the vast collection of molecules that cover our planet and connect us all.
Church, concerts and surfing are all very energetically charged and spiritual experiences for me. The album is the beginning of my own exploration into that, expressed through music.
What is the best suggestion your producer gave you?
The best suggestion Ernesto gave me was to go more electronic. I originally was stuck on the idea of “For A Long Time” being a stripped down, acoustic song on the album and resisted his encouragement to take a more electronic route.
Once I embraced his suggestion, everything changed and the rest of the songs soon flowed to become exactly as they were meant to be… elementally electronic and the most “me” of anything I’ve done so far!

Right now I’m in Ireland for a couple of months, spending time with my boyfriend, surfing my heart out and doing the administrative work to prepare for my album release, am booking tours and editing music videos. At the end of August, I’ll be doing a small UK tour and then at the end of September I release my album and kick off a string of tours in the USA that will take me through next spring!
To conclude the interview a short Q/A session, please answer the first thing that comes to your mind:
Cup of Tea – Kacey Musgraves
All These Things That I’ve Done – The Killers
Into the Mystic – Van Morison
The Story – Brandi Carlile
You Ain’t Met My Texas Yet – Josh Abbott/Pat Green
Portions for Foxes – Rilo Kiley
Fix You – Coldplay
And my most recent lyrical and musical obsession: Church by Samm Henshaw!!!!