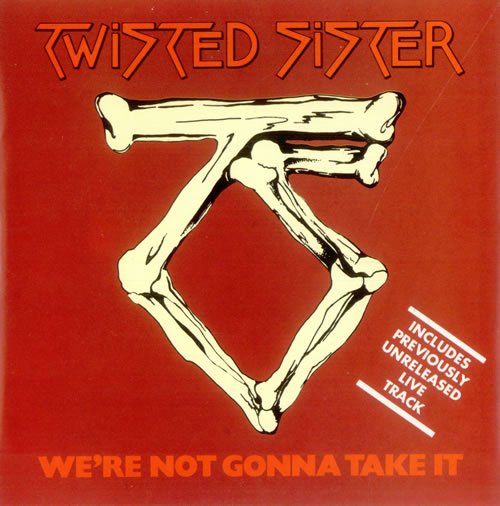 We are not gonna take it

Who remembers the Twisted Sister? Surely the lovers of heavy metal do………

The band, formed in 1972 is still touring, during their career of 41 years(!!) they released  six studio albums, the last one dated 2004 and called “Still Hungry”.

Many critics defined the band as part of the glam-metal genre but they are completely wrong, they might look like it at a first glance, but they are not.

We would say more a crossroad between punk and heavymetal (with very strange clothes).

“Stay Hungry” is their most successful album, released in 1984 and supported by MTV that never stopped to play “I Wanna Rock” and “ We are not gonna take it”.

The album is indeed the best seller of all band discography, it reached over 8 millions copies sold.

“We are not gonna take it” lyrics can be interpreted as the willingness of the band to be indipendent and to not follow any rule dictated by the producers/music guru or by the label .

They will not be just another band in the portfolio of the music executives, they are indipendent, free and they will not stop!

Did you know that the name of the band was supposed to be “they”? well we defintively prefer the Twisted Sister!!!

We strongly suggest you to go and see one of their show, all the details are available in their website: http://www.twistedsister.com