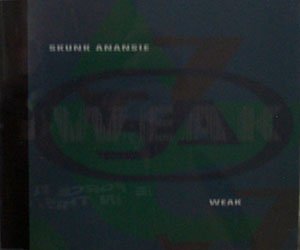 Punk and Heavy Metal combined together with a voice that you can distinguish among others: SKIN.

Somebody created the word Clit-Rock to describe bands leaded by strong charismatic singers …definitively Skunk Anansie is one of them.

Despite the fact that in 2001 Skin decided to leave the band in order to follow her projects of a single career, the band re-united again in 2009.

Their name is very special, it comes from Anansi that is the spider-man in the west-African tales and Skunk (that has several meanings) that made it sound punk.

“Weak” is the fourth single released out of the album “Paranoid and Sunburnt”, in it the the most part of the lyrics talk about politics and religion.

But this song is different, it talks about “broken” love, where many tears were dropped…..but now no more…..she is much stronger than before….