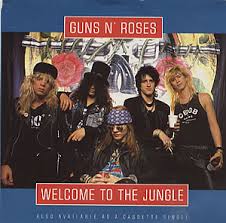 Welcome to the Jungle

Which is your jungle? the city where you live? where you grew up?

According to several  Guns N’ Roses biographies we can identify the jungle in the city of Seattle, Los Angeles/Hollywood or, and this is our favourite version, New York.

Many of you will be surprised to know about it, especially because NY doesn’t appear on the map of the yearly days of GnR (in fact the song has been released in 1987 as part of the album “Appetite For Destruction”).

Our story brings us back to 1980 when Axl visited the big apple and by chance met an old man that asked him if he knew where he was……..

Axl didn’t reply and the old man repeated ” I said, do you know where you are?”, but Axl apparently couldn’t reply to this question since he didn’t know the city……

The old man then said ” You are in the jungle baby” and “You’re gonna die!”