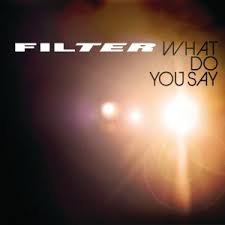 What Do You Say – Filter

Last year in april Filter released their sixth studio album ” The Sun comes Out Tonight”, the first single was titled “What Do you Say”.

It has been written by Richard Patrick (frontman) and Jonathan Radke (guitar).

The lyrics are inspired by the fact that in the world that no one is listening to other people frustrations.

Once Richard apparently said in a interview that it is like everybody is screaming at each other but nobody listens.