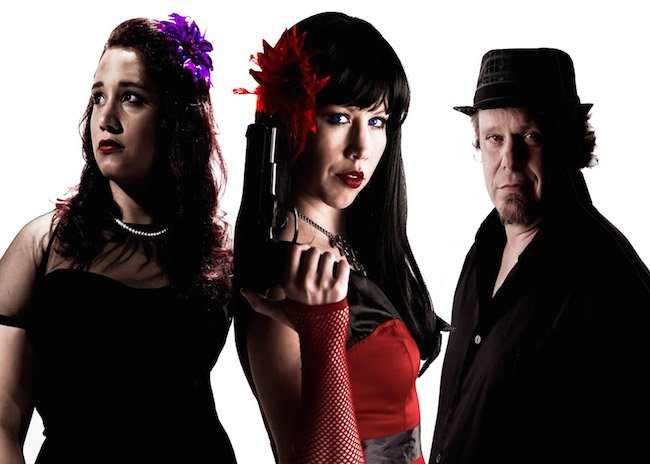 RYL: Your new album is titled “What You Do In The Dark”, what does the title mean?

KISS ME DEADLY: The title “What You Do In The Dark” is one of the songs on our CD.

Evan (our bassist) thought that this would be an excellent name for the CD, not coincidentally because it is the longest song name on the record, but because it introduces the album concept as a whole.

It represents an idea that with all of the “online culture” where there is some sort of transparency to people’s lives, there is also a private darker side to people that is hidden from the public. It’s what people do in the dark that is one of the few remaining privacies in this digital world.

It will also be the opening song to our WYDITD movie and will introduce all the characters of a 40 minute silent film created to play with the songs on the CD.

The audience will meet the characters while they are in the dark, doing mysterious things. 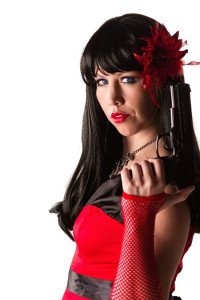 RYL: Let’s talk about the song “Shallow Focus”, what does it mean to you?

KISS ME DEADLY:  I wrote Shallow Focus after watching the movie “Blue Valentine” which was shot entirely in shallow focus.

Though I conceptually understand the cinematic motivation of making the viewer feel as trapped in the relationship as the characters were in the film, I could not stand the constant shallow focus on the characters’ faces and not being able to see any of the world around them as it was out of focus.  I got so mad I started ranting and realized that this is not just shallow focus in a movie.

Shallow focus on a cultural level is just as prevalent, as everyone stares into their phones and computers, and it is probably the subliminal motivation for filmmakers shooting entirely in shallow focus.

I ran to my Glockenspiel and began banging out the first notes of the song.  It is the only song I ever wrote from beginning on the glockenspiel and as I banged away and sang, I saw the video form in my head at the same time.

The video demonstrates a person so focused on his phone and the awesome band KMD that he is watching, he misses all of the real world that is going on around him.

This song represents our current techie focus and obsession with staring into our devices while missing the world around us. That’s some shallow focus.

RYL:  Do you remember the day you wrote “Lady Killers”? Tell us about it.

KISS ME DEADLY: I do remember the day I wrote Lady Killers.  It is actually about a couple business partners who were shady and thought that when they no longer spent time with me, that all my projects, the band included in this, would die.

I am very happy that the opposite occurred.  After dumping the lady killers, both the band and the production company have become more successful.

Strangely enough, it was this very song that connected us with Kingwood Records owner Todd Kwait.  I met him at one of Evan’s film showings and I slipped him the single of Lady Killers.

He loved it, played it to his friends, and then put us on his label. 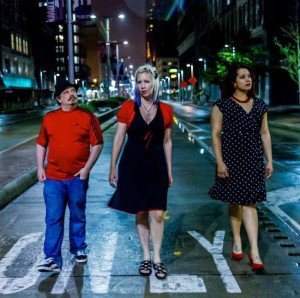 RYL: What do the lyrics to “Crawl” mean to you?

KISS ME DEADLY:  Crawl was written by (drummer) Madelyn Hayes but to me the song demands that in order to be able to get forgiveness for wrong doings that person must “Crawl for me”.

The drastic and moody up and down of the song represents the ups and downs of a turbulent relationship with the raw emotions of requiring some serious apologies for any kind of forgiveness to even be considered.

KISS ME DEADLY:  I suppose there is a common thread between my songs.  I write about what upsets me, whether it’s a person or an event or a social issue.

When I read about drones being used by the police a couple of years ago, I freaked out and Drone.  Our song “Sherry Hides the Rum” is a true story about this couple I witnessed always getting in domestics over hiding bottles of rum.

Names were not changed to protect the innocent. Agent is about breaking up with a previous band and starting my own. I write about how the world makes me feel and how I see the world.

If I couldn’t play and write music, I would go crazy.  It’s a blessing and a curse.

RYL: What’s your process for writing lyrics? Do they come before or after the music is written?

KISS ME DEADLY:  I have written in many ways, from pure raw emotion to careful conceptualized orchestration.  What You Do In The Dark was written as I played and cried and strummed real hard trying to let my emotions out and what came out was the song that is now the title track of our CD. Stalemate was written as I played around with a delay pedal and wrote the guitar riff.

An old guitarist Joey Nix wrote the guitar riff to Agent and I wrote the lyrics on a clip board as I paced my classroom one day administering practice standardized tests.

P$ was written for my Thesis Advisor, who was a Doctor of Video Games, and passed away while I was under his tutelage.  I wrote the chorus after a quote that he has said as he crippled a young boy in Guitar Hero.

I wrote the bridge of the song to thematically represent his life in Mario Brothers sound effects played on analog instruments.

Mostly I use my guitar to write songs except for Shallow Focus which I used Glockenspiel but mostly I play an instrument and come up with the words and melody together. Madelyn writes lyrics and a melody and then brings her songs to the rest of us to play music.

KISS ME DEADLY: I suppose Stalemate is kind of clever.  Yes there is a traditional chess metaphor in there but really I was dating someone who was boring and stale and realized that he was a stale mate for me.  I asked myself “how’d ya get so stale, you’re such a stale mate.”

I know, real nice inner monologue right? Then I realized I suppose that equates to to kings on a chess board with no moves left.

It is boring and stale and no fun to play so I just kind of combined that into Stalemate.

As a general rule, I think that Cole Porter was an amazing lyricist.

RYL:  What is the best verse you’ve ever written? Why?

KISS ME DEADLY: “You’re spreading lies and you plant them all around town

You fertilize with the bullshit you lie down

But nothing grows in a poisonous pit

and when it shows you are counterfeit

I will not be around”

This is the second verse of Agent. I naturally love all the inter rhymes because I am a nerdy wordsmith type.

However, the reason why I picked this as one of my favorite verses is because someone once quoted it and posted it and said that the song helped her through a break up.  I cried when I read that.  I felt so happy that a song born out of my own pain went out into the world and helped someone else through theirs.

RYL: What is the most important thing you hope to achieve with the music you create?

KISS ME DEADLY: I would love to work as a musician as my primary income revenue but we are not there just yet.  I suppose if I was able to make a living off of our music, I would consider that a success.

My dream is to play to a few thousand people one day and the audience sings the chorus with us. But the most important thing I hope to achieve is a radio hit.

Even if we one-hit-wondered it like Right Said Fred with “I’m too sexy” I would feel pretty happy.  I hope we several-record it though as well as have a radio hit.

KISS ME DEADLY:  I wrote recently a song called Brave Enough, though I have a few brewing.  Madelyn and Evan say that Brave Enough has a great chorus.

Maybe it’s a radio hit of the future.

RYL: Tell us about your tour plans.

RYL: How does Cleveland inspire your music?

KISS ME DEADLY: Cleveland was a pretty rough place to start playing music in. I tried to play with a guy I was dating but he was too embarrassed to be seen in public with me playing guitar. When we jammed with other people in private, the boys would never let me solo.

I decided to start playing mandolin so that there was no way they could cut off my solos. Finally I convinced him to go to an open mic with me but since he didn’t want anyone he knew seeing him play with me, we drove an hour outside of Cleveland to Painsville.

When I finally ditched the dude and began on my own, I started out in Painsville and eventually joined a band.

The experiences I had in the band of heartbreak, betrayal, theft, sabotage, sexism, underestimation, and abandonment shaped my songwriting.

When I began my own band, I experienced more of the same and just kept folding it into my music.   Kiss Me Deadly music comes from the heart of a female rocker trying to play her songs in a sexist music scene that is said to “eat their young”.

I like to think that now that I have kicked around the Cleveland music scene for a while and are finally making some waves here, when we take our sound to other cities, we will sound killer.

I suppose that is not the prettiest story of how a city inspired music but hopefully the music will inspire listeners.