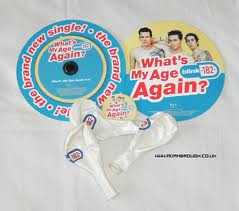 This last album has this title since it is composed by various songs, various sounds, each one of them pertaining to a different member of the band.

For this reason it is so different ( so many of you might not like it) while , indeed, very unique.

But in 1992 everything was different, stories of driving buses across California, doing gig, following the scene pop punk, the first fans, albums, concerts and the name: Blink 182……… selected initially as Blink, but avoided because an Irish band was already having it.

The historical band members: Mark Hoppus, vocalist and guitarist Tom DeLonge, and drummer Travis Barker…..you might remember them running naked in the street of Los Angeles…..**

Did you know that Barker had an accident with the plane? He was the only survivor ….this plane crash reunited the band members once again and put the base for the reconciliation of the three rockstars.

What’s my age again is part of the album “Enema of the State” published in 1999 and considered the band’s most important success.

Hoppus wrote “What’s my age again?” and the lyrics are talking about a man that is becoming adult while he continues to act as a kid…..

It seems that the band was saying… we act as we want, we don’t need you to ask us what is our age…