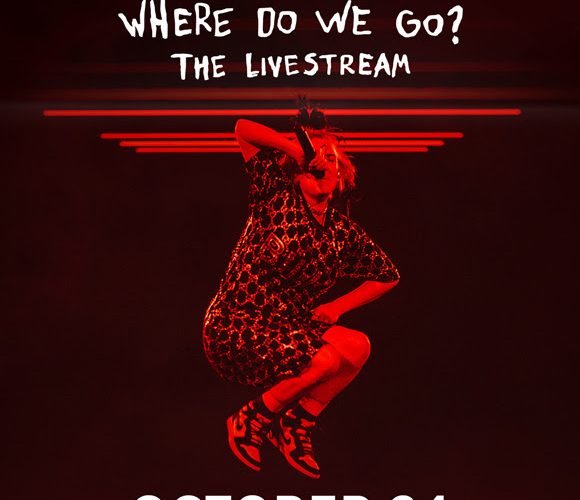 Where Do We Go? or How Billie Eilish changes the game for Live Streamed Concerts

Where Do We Go?

This is the question we asked ourselves after watching Billie Eilish‘s live streamed concert from Los Angeles, CA, on October 24th. She raised the bar so high, that we wonder what else in the world of livestream events could be done after this surreal experience that Billie, her brother Finneas O’Connell and her long-time touring drummer Andrew Marshall have offered to the world.

In case you missed the chance to watch it live, we’ll recap it for you. Though we’re afraid words aren’t really capable of doing this…

Where Do We Go? The Livestream.The one hour straight 100% live show debuted with a countdown, revealing Billie and her bandmates on a 60ft x 24ft stage surrounded by 100ft x 24ft 360 LED screens, providing 3D, real-time-content integration. First song: bury a friend. Next, a giant spider joined them moving its legs all over the stage, sometimes in a kind of natural, yet well studied choreography with Billie. It was her same old spider friend from you should see me in a crown, I’m gonna run this nothing town, watch me make ’em bow one by one by one… And damn, she did it! And her crown will be shining on her head for a long time, we’re tellin’ ya! 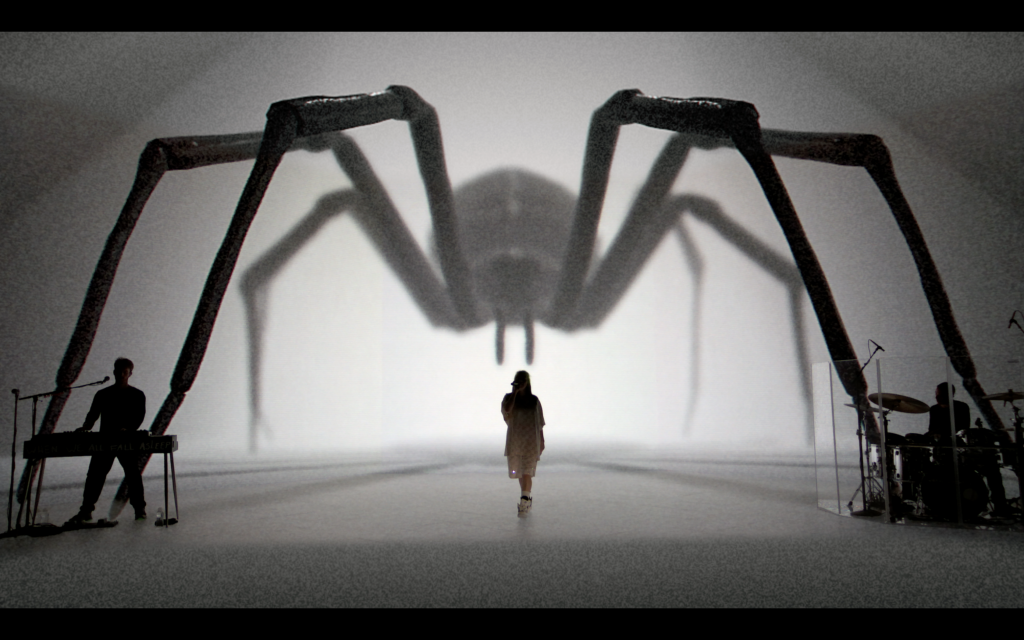 Couple of songs later we were transposed to the ocean… to those ocean eyes. The waves floating up & down in the studio gave everyone a soothing state of mind that is much, much needed during these pandemic times, feeling like a never ending battle. A xanny might help, but we believe the power to overcome any obstacle is within us and that music is the therapy which can lead the way to our inner power and unleash it, so we can stay strong and united in front of this virus and anything negative happening into the world and in our lives.

i love you. Three little words that can change the day and the life of somebody. Don’t be afraid to say it, just like Billie ain’t afraid to sing them. It’s not easy for her either, but she did it in an acoustic moment where nothing but the moon and the stars were surrounding & watching over her and Finneas, as they were sitting in the heart of the Universe. Pulsing beats of healing energy & courage into the world. 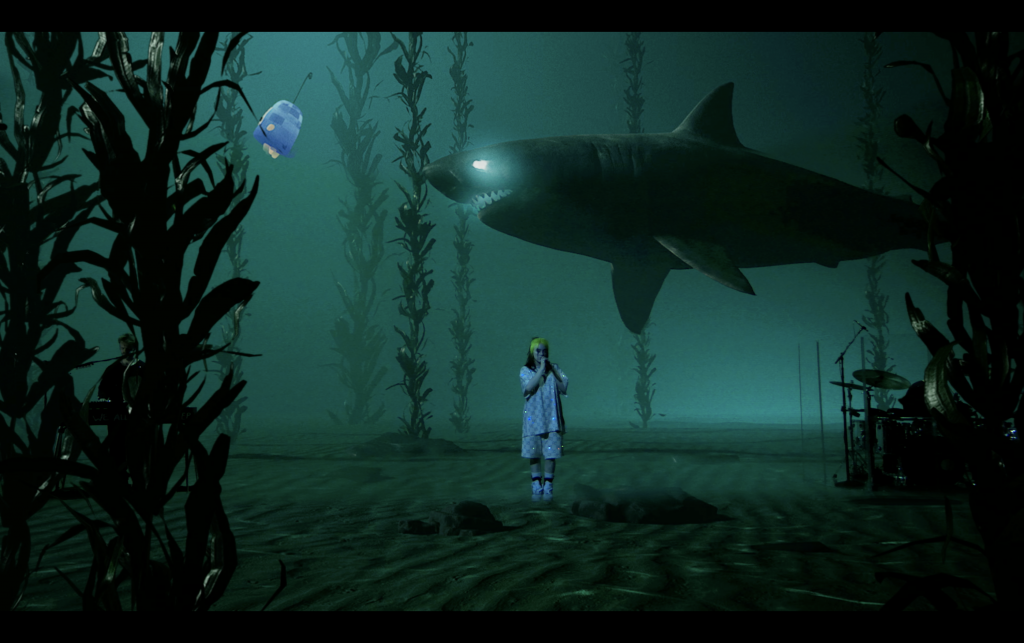 From the depths of the sky straight into the depths of the waters. That’s where Billie took us for ilomilo. The big shark was floating around, patiently awaiting for her to finish the song. Then it opened its huge mouth and… took Billie & all of us in, but as there it was No Time to Die, we were soon released straight into a James Bond mission. Even the unshakable heart of Agent 007 must have skipped a beat when Billie touched that high note, giving us all goosebumps. And speaking about feels, we felt awaken when we saw images of evil stuff done by humanity to our own selves and to Mother Earth, projected like a film reel to artists’ left & right during all the good girls go to hell. A song so intensely discussed, that Billie said it can be about whatever you want it to be. We’d add: as long as you do your part of the job & make Heaven out of Earth, we might all get a chance and not actually get to live in a Hell. 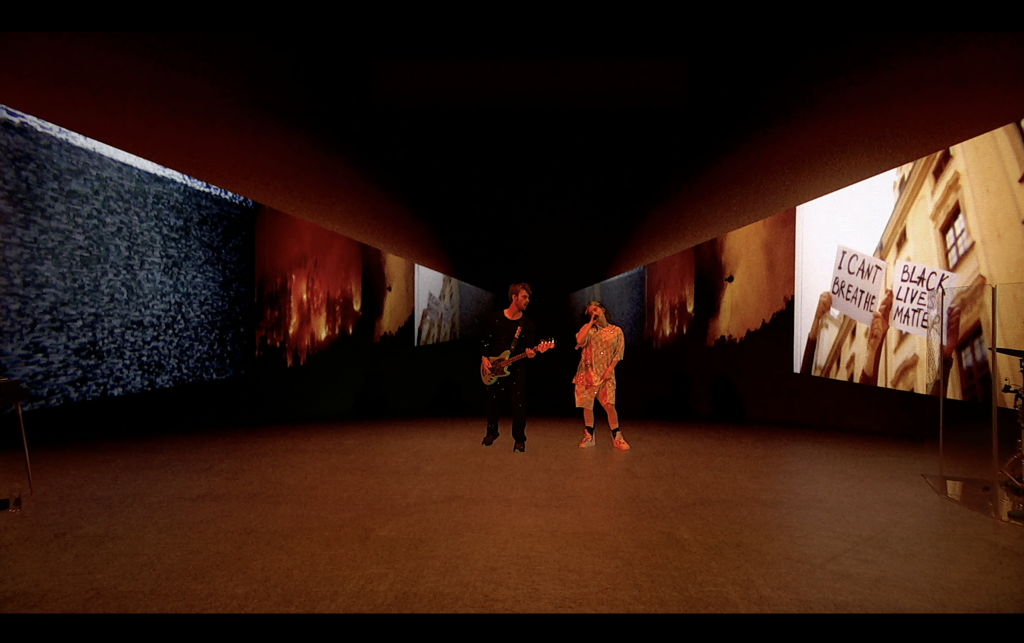 Using state-of-the-art XR technology, music fans from all over the world were brought together and transported from their homes into a fully immersive virtual experience. They surrounded Billie on stage, projected in real time on the screens and boy, what a joy we have witnessed! They had a dream, it was everything they wanted & Billie, by the side of her live production collaborators Moment Factory (also responsible for producing her WHERE DO WE GO? 2020 world arena tour) and interactive production crew at lili Studios, have made it possible! And it all felt like a mutual promise between the artist & her fans: as long as they’ll be there for each other, no one could hurt them! That’s the power of music! It is healing. Regardless of the language you speak, music speaks the same language to all – the language of the soul. 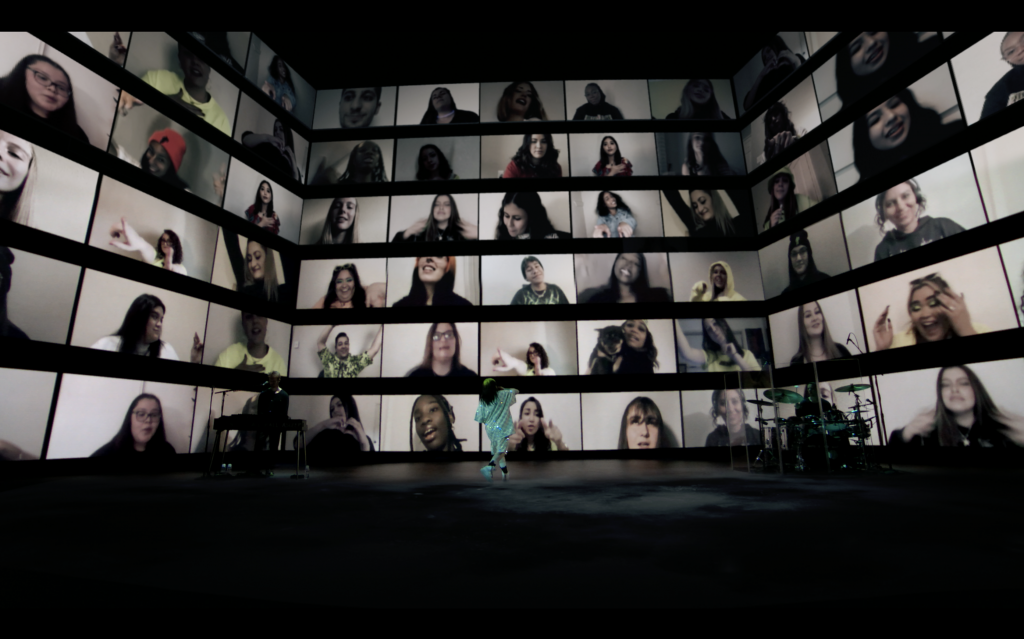 And when you listen to your soul, you’ll know which road to go, the road that will lead you to the best version of yourself. The road to your future! my future was the moment when the whole set came to life. Luxuriant animated vegetation grew, surrounding Billie & her bandmates with trees & flowers, opening her heart, allowing her to listen to her inner voice and follow it. It was a delightful scene, full of light & hope and cute little creatures like director Andrew Onorato‘s signature purple frog from the official music video.

Time flew fast and just like on the WHERE DO WE GO? WORLD TOUR, Billie wrapped up her show in a raw of applauses from the crew in the studio, with her evergreen song – bad guy!