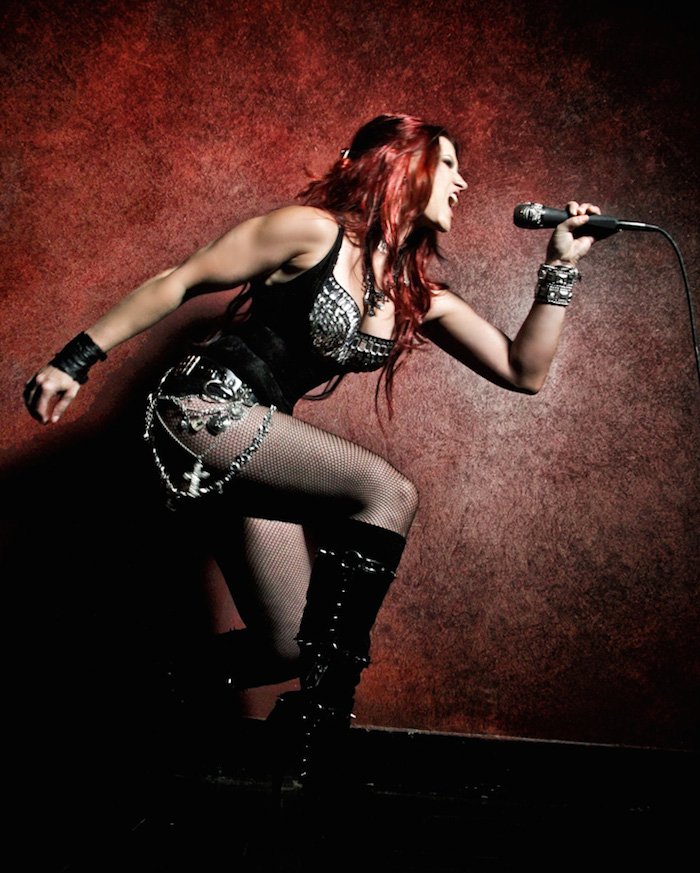 RYL: Your new (and 5th studio) album “White Noise” has just been released. How was the recording process? Any challenges?

Jasmine Cain: There were a few challenges.  We began working with producer, Lincoln Parish for the album initially, but around the halfway point, he wasn’t really involved anymore, so we had to switch gears and take over to finish it on time.

We had postponed the release date 3 times and just couldn’t justify making everyone wait any longer than we already had.

Fortunately, I’ve worked with Mills Logan (Taylor Swift, Luke Bryan, Toby Keith) on most of my previous projects, so our working relationship is very relaxed and we can get some things done in a short period of time.

We’re both very focused, so it all came together very well and everyone was really happy with the finished product.

Mills agrees that this is by far the best album we’ve ever done. Even the performances by the musicians and vocalists were above what we expected because the energy was so incredible. This album was meant to done. Come hell or high water, it was going to be heard!

RYL: What does “White Noise” mean for you, lyrically speaking?

Jasmine Cain: To me it is an overload of information which keeps you from hearing the real message.  It’s a distraction. Some people call it the “voices in their head”, I call it “White Noise”.

RYL: Tell us everything about the song “Break Even”

Jasmine Cain: Everything? Hahaha. My longtime friend and co-writer, Paige Logan (Yes, this is Mills Logan’s wife), decided to write together after over 8 years of working together.

Our lives have changed over a thousand different ways since the last time we wrote together for my album, Highway Prophet.

We had been through some hellacious times and near death experiences and found our peace (temporarily) again for the time being.

After going through what we both went through, we found a more mature approach to handling life situations. We were discussing finding partners in life and knowing immediately when the one you’re with wasn’t “The One” and finding an adult way to “cut the cord” without the backlash of name-calling and hard feelings.

It’s an incredibly hard thing to do and the older we get, we realize we don’t have time to waste on the wrong one.

We launched into writing with this in mind and the song “Break Even” was born. It’s really just a sophisticated way of saying “Hey, it’s not working for either of us, so rather than fight each other and the process, we should just shake hands and walk away”.

Jasmine Cain: It just depends on the song. Sometimes I have a chorus in my head and write around that. Sometimes I sit and write poetry and design the song around that.  Because I’m a fairly unschooled musician, my approach to the musical aspect is quite simplistic, but the lyrical content is more intense.

I have a special gift for saying exactly what I need to say using minimal wording. Every word needs to count though.

That is really important to me. It’s fun to have thoughtless party music every once in a while, but I can’t stand the thought of putting myself out here and using the moment I have to be heard to proclaim my excitement to party.  I have to leave a legacy for myself. It’s my own personal goal.

Jasmine Cain: Nope. I write what I feel at the moment. I’ve completely grown up writing my life out in songs. You can hear the changes in maturity from album to album.

The content changes. The way I handle situations has changed. I used to be fueled by rage, now I am fueled by my own goals and I challenge myself to be better.

The intensity is still there…it’s just different.  I just couldn’t stay that angry all the time. It was eating me alive.

RYL: Lyrically speaking, what’s behind the verses of “Coming in Hot”?

Jasmine Cain: You know, I’ve wanted to write a song about racing for a while because we live life in the fast lane.

On our last band album, Highway Prophet, we decided to throw together a writing challenge and finish a song in 15 minutes.

We got jacked up on coffee and the guitar player hammered out an AC/DC style riff and I threw out the title “Coming in Hot”……..and that’s where it ended.

We couldn’t get it together, so we abandoned it.  When we hired our guitarist, Benjamin Johnson, we had no idea he was into muscle cars, so when I suggested that we finish this song, he was 100% on board to make it happen.

I wrote the lyrics based on racing terminology with a linear meaning to just “life in the fast lane”. He nailed the high speed guitar solos and we were super happy with how it came together.

There was some argument about the bridge part because I wanted to “shift down” for a second and create some dynamic in an otherwise “balls out” song, but after it was finished, we all loved it.

It’s a perfect album intro song. It gets everyone up and rocking right from the first note.

RYL: Do you remember the day you wrote “Fall to Rise”?

Jasmine Cain: Absolutely. I remember the day we wrote every song.  Fall to Rise was an end of the day attempt with me and Paige Logan and my longtime friend and keyboard player, David Michael Thomas.

We had written “White Noise” earlier that day and took a little break and came back to try and write another song. We already felt like we won the lottery because “White Noise” was so incredible, but Dave felt like he had one more in him and started playing the guitar part for Fall to Rise.

I still have the demo of he and I singing it on my phone. I knew it had to be a duet from the start. The lyrics were very simple but powerful.

Dave had a lot to do with that.  He and I also have an amazing writing relationship and friendship. Dave had been battling some addiction problems and was now clean and sober and we were just discussing how parallel our lives were with addiction and my struggle with maintaining a band all these years.

We had some serious ups and downs but in the end we knew we had to “Fall to Rise”.  It was the perfect title and we wrote our parallel lives in a song.

We were so lucky to have Ralph Saenz (Michael Starr/Steel Panther), who is one of the most accomplished rock singers out there sing this duet with me.

RYL: What is the most important thing for you while doing music?

Jasmine Cain: I can’t be distracted by anything. Other problems just have to wait. I crawl into a hole and eliminate all the outside noise and listen to the silence.

I can be incredibly introverted when recording. I honestly don’t know how to be around people when I’m in the studio. I sense their energy and it makes me dizzy. It might sound fucking crazy, but it’s true.  It’s like I hear their “inside” voice just as I would hear them speaking to me and it’s super crazy and distracting.

I just have to hide.

However, doing music “LIVE” is a totally different story. After I come out of the “hole” and we release the album, I absolutely DEPEND on other people’s energy to do the show. I feed off it.  It’s a strange dichotomy.

Jasmine Cain: We stopped writing once the album songs were complete, but one song that we all loved that didn’t make the album cut was a song called “I Don’t Care”.

It’s a rather cold-hearted song about a gypsy lifestyle. It’s a warning about getting too close to one that was born with wanderlust.

It’s a beautiful waltz ballad and it just puts you in a calm breeze trance that almost paralyzes you as you watch the one you love leave. It’s so comforting and gut-wrenching at the same time.  But it just didn’t fit the overall vibe that we were going for on this album.

Who knows, maybe we’ll just release it on its own someday.

RYL:  Which is the best bass guitar you ever owned?

Jasmine Cain: Warwick neck through 4 string Thumb Bass.  I still use it on all my recordings. It was my first Warwick and my favorite.

I had to pawn it at one point of my career because we were so fucking broke and they repossessed my van when a tour we thought was secured fell through.

We had nowhere to go to get our way out of it, so I pawned my baby with the promise that I would buy her back.

After I got the van out, I came up with the money and paid the guy that had her immediately.  I can never be without that bass guitar.

Since then, I have collected over 8 Warwick Basses, but that first one will always be “The One”.  We’ve been through everything together. 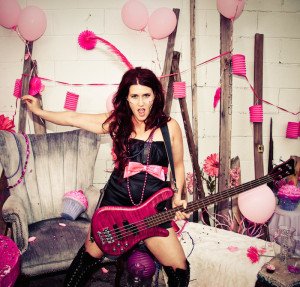 Jasmine Cain: Are you serious? I have to pick a favorite verse? This is by far the hardest question I’ve ever been asked because there are so many.

But you won’t let the truth be shown

So now it wastes away inside your empty shell

You’re a child without a home

You burn alive amongst the flames inside your

Hell I don’t know the answer

Life is full of these disasters

Hell I don’t know, but I am here

Or this: (it’s actually a chorus)

Give me love, give me peace

Let me have a voice to speak

Give me faith, let me in

Give me something else

Cause I don’t know

How to go on

Or this: (also a chorus)

Keep the chains around the lie

‘Til the truth unlocks it

Jasmine Cain: Oh man, there are so many shows! All dates are listed on our website at www.jasminecain.com.

You can check out to see if there are any near you! You can also get updates on our Facebook page /jasminecainrocks or Twitter @jasminecainrock. ReverbNation is also very helpful /jasminecain. Go forth and rock!

Album is available at iTunes https://itunes.apple.com/us/album/white-noise/id1023524537 and Jasmine’s website http://jasminecain.com/product-category/white-noise