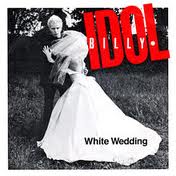 We went to see several times concerts of Billy Idol and , believe us, we can definitively say that Billy doesn’t show at all his 57 years.

His real name is William Michael Albert Broad and, despite the fact he lives in USA since 1981, he is originally from England.

There, back in London, he was member of the band “Generation X” and fan of the Punk Rock Band Sex Pistols.

His first solo album (called “Billy Idol” ) has been released in 1982 , included in it songs like “Dancing with Myself” , “White Wedding”, the cover “Mony Mony”.

It launched Billy as superstar in what is defined as post-punk pop rock genre…. We are in the eighties, the year of “Ashes to Ashes” of David Bowie.

Billy Idol in his career will release six additional studio albums, the last one in 2006 called Happy Holidays released during the Christmas Time.

During the last seven years Billy dedicated a lot of his time touring the world together with his friend and guitarist Steve Stevens.

White Wedding had a very controversial video but, most probably, the most liked by all Idol’s fans….MTV support in playing the song gave additional visibility to the band.

We are saying that it can be both…maybe Billy wanted just to say that, despite all the troubles and difficulties of the world, we can always “start again”  .