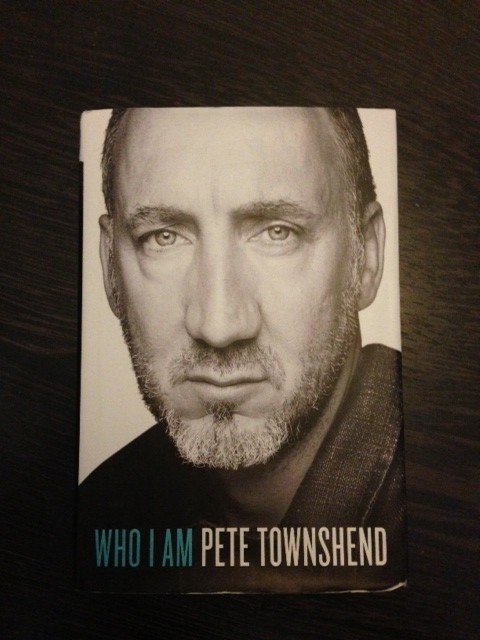 WHO I AM – Pete Townshend

Two days a go we attended to one of the best shows we have ever seen in our career, a moment that we will not forget: The Who concert in London.

It was not only the presence of Roger and Pete to make it so special, but also the memories, expressed with music, of almost half a century of career…..even Keith Moon and John Entwistle contributed to the show, in a very touching way.

At the end of the show Roger thanked Pete called him “Maestro”.

Well, we went and we looked at the definition of Maestro in internet and here is what we found: “any man regarded as the master of an art”.

Reading Pete’s autobiography “Who I Am” ( published by Harper Collins in 2012) you will really understand that Pete is really a Maestro in lyrics and music writing a true artist , a real genius.

The book counts over 500 pages that will bring you trough his life, without secrets, without “half-said” sentences….you will have a grasp of it, while,most probably, you will not be able to understand in fully his complex personality.

You will know him better, this is for sure, and you will discover a very intimate part of the story of The Who, one of the greatest rock and roll bands of all times.

Living the life he lived it wasn’t easy, despite all the amazing and crazy rockstar-things.

What he is trying to tell us in his “opera prima” is that, at the end of all, he is just a man that had his problems and his joys , his black moments and the white ones.

A man that had a gift, the one of being a great musician, but, especially, a great lyricist a great modern writer.

“Tommy” and “Quadrophenia” are just a celebration of his fantastic creativity and dedication; the same dedication that, more than once, brought him far from his loved ones, far from everybody…except for Meher Baba that enlightened his life with his guidance, even after his death.

If you are just a fan of The Who or a rock n roll lover, don’t worry! You will find a lot of anecdotes that will make you dream, sometimes laugh and, for sure, willing to know more and more about it.

A part of The Who related stories we loved is the project of Pete and Mick Jagger to create a rock n roll circus that was supposed to travel all over USA! Would you imagine that??

The project couldn’t happen only because the american rails wouldn’t allow the fast transportation of all the equipment!

We would have loved to see it! Pete …hurry! you are still in time!!!

At the end, their dream was realized and the couple created “Rock and Roll Circus” , amazing experience, but not the same as planned initially.

“Who I Am”, as Pete said, he wrote almost 1000 pages, reduced to 500 for obvious reasons….we believe not even 10.000 would be enough to explain his personality…. in the end, geniuses are like this, they cannot be explained, only respected and loved.

(picture on the cover by Michael Ochs Archives/Corbis)