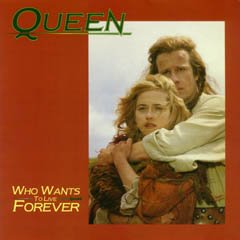 Who Wants To Live Forever

Couple of days a go we run in to a phrase left written by Freddie Mercury that was saying “ you can do anything with my legacy but never make me boring”, we loved it and we think that there is no person in this world able to say that Freddie’ s or Queen’s music is boring…

Actually is the opposite, you never get tired of listening to it, even if you did it one million of times, it is always like it was for the first time .

“Who wants to live forever” is a song written by the guitarist Brian May (that sings also at the beginning of the song!!) in 1986, while he was coming back home after having seen a part of the movie “Highlander”, in fact the Queen were asked to write the soundtrack for the movie.

The scene is the one that sees the main character of the movie “the higlander” watching his wife diying while he will live forever and will never get old.

Is this a torture or a fantastic advantage versus the society? We are curious to know what you think about it….

The song has been released also in the Queen’s album “A kind of Magic” that was the fourteenth of the band and that sold worldwide almost 17.000.000 copies.

Despite the fact that there was no official soundtrack for the movie “highlander”, Kind of Magic contains several songs that were part of the movie.

This was the last studio album followed by a tour made by The Queen,due to the sickness of Freddie that left us at the age of 35 in 1991.

You know, Freddie was able to live forever, in our hearts…….