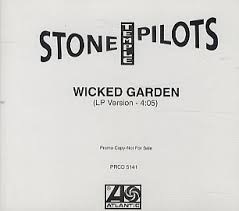 Part of the very successful album “Core”, Wicked Garden has been written by Scott Weiland in 1992.

The song was never released as a single while it had a huge success among the STP fans.

Apparently Weiland once commented that the song is about loosing innocence and purity from our life; like a child, we have all that in us, but then we lose it.

Other interpretations of the song want that it is all about sex, the wicked garden would have been only a metaphor to indicate female  genitalia (gardens).

Why is then “Wicked” ? It seems that it is referring to the cruel emotions generated in a relationship between a man and a woman, the sex is just a connection between the two.

Or, the wicked garden can be just a place of freedom, where a man and a woman can meet without compromises, without being affected by judgements of pre concepts .