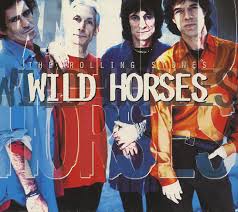 For many Wild Horses is one of the most beautiful songs of Rolling Stones.

It has been released in 1971 together with the album “Sticky Fingers” and it has been recognised by Rolling Stones has one of the top 500 songs of all time.

There are many interpretations to this song; some people are saying that was dedicated by Mick to his girlfriend Marianne Faithfull, some others that it was inspired by Keith Richard’s son “Marlon” and finally others that are saying that Wild Horses are just another way of calling drugs.

Surely, both Keith and Mick, have written the lyrics of this song, indeed it talks about common experiences…..to be out from home touring with the band, far away from the loved ones.

Who are the Wild Horses? Again multiple theories…. drugs (the most probable), other band members……Mick and Keith themselves.

Marianne Faithfull, claims “Wild horses couldn’t drag me away” was the first thing she said to Mick after she pulled out of a drug-induced coma in 1969…….. would you believe that?