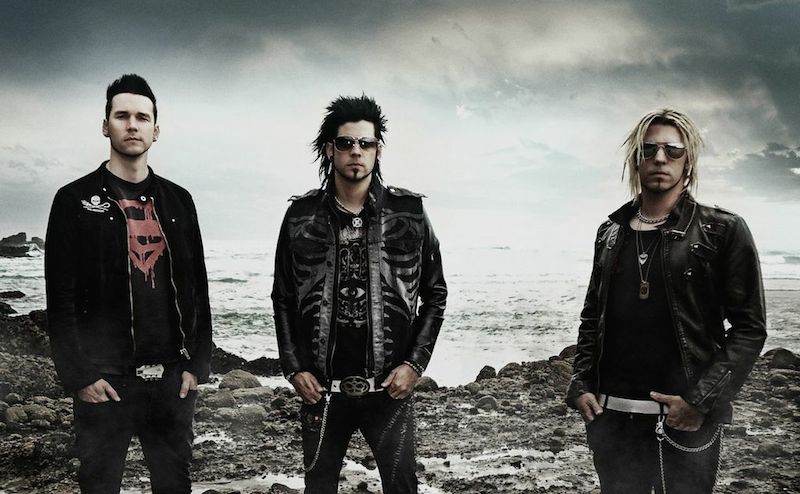 RYL: Are you currently preparing your next tour? Where you will perform?

LIKE A STORM (http://www.likeastorm.com/): We are actually out on tour right now, with our mates in Alter Bridge!

We just played the legendary Fillmore Theatre in Detroit, which was amazing – and our next show is in Worchester, MA.

RYL: Which is the greatest show you have done so far in your career?

LIKE A STORM: It’s always hard to narrow it down to just one show – but I’ll never forget our first show here in the US.

We had been invited by the Creed guys to open on their “Full Circle” Reunion Tour in 2009, and the first show of that huge tour just happened to be our first ever show in America.

That night, we walked out onstage to play our first US show in Pittsburgh, PA – to a sold out amphitheater of over 15,000 people!

RYL: We loved your last single “Love the Way You Hate Me”, what is behind its lyrics?

LIKE A STORM: Thank you! We were really proud of that song, it was so amazing to have it on the radio. The lyrics to “Love the Way You Hate Me” were inspired by someone in a small town truck-stop calling our brother (and bassist) Kent a “freak”, because of how he looked.

I guess they don’t get too many rock n roll types with dyed hair and piercings in that truck stop! That inspired the idea of a song about being true to yourself, and about finding strength in being different.

I think my favorite line in the whole song is, “I’d rather be a freak than be a fake.” To me, that totally sums up the idea of being yourself, no matter what other people may think.

RYL: Are you working on new songs?

LIKE A STORM: We sure are – we are actually mixing the last songs of our new record today!

The first of these brand new songs to be released is our new single, “Wish You Hell” – which came out last week. It has been so awesome to have this new music out for our fans, and to hear it on the radio has just been surreal.

These new songs will be released early next year on our upcoming album, “Awaken The Fire”.

RYL:  Tell us about “Never Surrender”, what inspired its lyrics?

LIKE A STORM: I can still remember the night that “Never Surrender” came to be. The music business, like every other walk of life, has its fair share of ups and downs.

We were in the middle of a long battle to have our music released, and get back on the road to play for our fans. We loved music more than anything, and didn’t want to give up the dream that we had fought so hard for – but some days it just seemed impossible.

One night, laying in bed, I could just feel myself getting more and more angry by everything that was standing in our way.

This feeling of frustration lead to a furious defiance, a refusal to give up, and it became so overwhelming that I couldn’t sleep.

So I got out of bed, picked up my guitar, and “Never Surrender” started pouring out of me. The first line came straight away, and it really spoke to how I felt, how we all felt:  “You put a wall in my way, and I’ll break it…”

LIKE A STORM: My brothers and I all write, and our songs tend to start as an idea from one of the 3 of us. Someone will come with a new song and their lyrical ideas, which can range from a few lines to a full song.

Then we work on the music and lyrics together, making every idea and image the best that we can. We have always loved great lyrics, and our goal is to find those lines that really capture the vibe and emotion of the song.

LIKE A STORM: One of my favorites is the second verse of “Love the Way You Hate Me” – to me these lyrics really summed up the message of the song:

So take a shot, say what you want about me

All you are, is everything that I will never be… fake!”

RYL: Which is the last song you wrote :

LIKE A STORM: The last song we wrote would be our new single, “Wish You Hell”.

We had so much fun with this song, combining hard rock with our love of delta blues.

When we came up with the line “Wish You Hell”, it just seemed like the perfect good riddance to someone who had screwed you over. It also totally sounded like the title of an old blues song!

So we decided to combine the two genres, and rather than sample an old song, we wrote and created the blues part ourselves.

Lyrically, it was really cool to write in the style of those old blues records. For the intro, which sounds like an old record from the 30s, we just started riffing over the music, and came up with these words:

“You ripped my heart away,

Oh Lord I wish you hell

You ripped my heart away, oh yeah,

Oh Lord I wish you hell”

For the hard rock part of the song, we really dug into what you would want to say to someone who had screwed you over:

“Take one minute of your time

Look at the wreckage of the ones you’ve left behind

You’re gonna get what you deserve.”

RYL: Do you remember the day you wrote “Chemical Infatuation”?

LIKE A STORM: I remember the day that Kent showed us this awesome, demented, super heavy guitar riff that he had come up with.

We were hooked instantly – the vibe of the music was so cool and hypnotic. I remember Chris just started singing over the top – the line that he came up with on the spot just fit so perfectly with the music: “And I don’t know the face when I look in the mirror…”.

The creative spark was lit, and “Chemical Infatuation” was born!