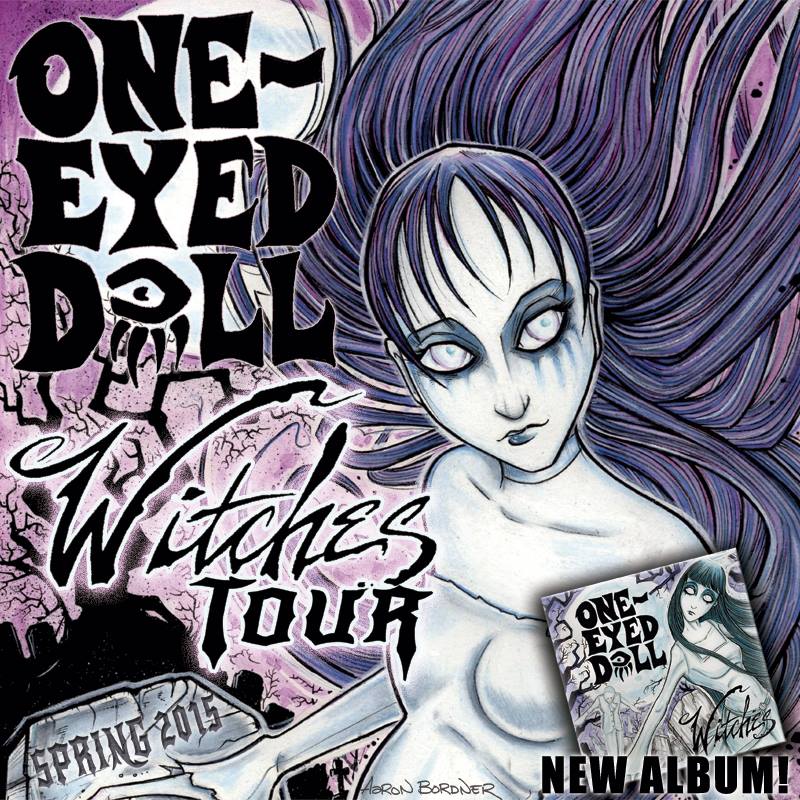 WITCHES – interview with ONE EYED DOLL

RYL: One month and a half and you are going to release your new album “Witches”, how do you feel?

ONE EYED DOLL (Kimberly): I’m so ready to just get it out there into the hands of our fans! I feel like I’ve been keeping it a secret for too long. I just want everyone to hear it! Very excited!

ONE EYED DOLL (Kimberly) : That’s a toughy.. It changes all the time..

Maybe Stillness, partly for the production quality and the quiet acoustic to epic metal dynamics. It’s really dramatic, just the way I like my music.

I guess this whole album is pretty dramatic. The vocal bridge in Stillness was one of my most memorable sessions, ever.

It’s a dedication, a remembrance to the victims of the Salem Witch Trials. I felt over 400 years of sorrow pass though my voice, all in that moment into the song. I don’t know if that makes sense..

It’s just very special to me.

ONE EYED DOLL: (Kimberly): I don’t really have a set way.

They come out the way they want to, as they’re inspired to. Sometimes I sit down with a guitar or piano, and sometimes it’s just a voice in my head..

Sometimes the words come out right away with melody and sometimes without. It’s just a natural thing that happens, and there’s no particular “how” about it.

RYL:  What is the meaning behind “Prayer”

ONE EYED DOLL (Kimberly): Witches is a story. In the, “Prayer” part of the story, the Puritan townsfolk are seeking redemption from the devil, who they’ve been told is threatening their children and way of life through witchcraft. It’s a bit of a glimpse into my idea of their point of view.

RYL: Do you remember the day you wrote “A rope for Mary” ? what inspired its lyrics?

ONE EYED DOLL (Kimberly):  I came upon the sad story of a woman named Mary who was executed for witchcraft in 1692 in Salem Town, Massachusetts.

The song, “A Rope For Mary” is her tribute.. the tale of the Salem Witch Hysteria told from her ghost’s perspective.

The entire album was conceived from my readings about her, really. I hope it honors her memory.

ONE EYED DOLL (Kimberly): I’m all about this new SOTO album, “Inside The Vertigo” right now.

It’s Jeff Scott Soto’s new project.. Love it. If you’re only giving me $1, I guess I have to pick one song. I’ll take the title track.

ONE EYED DOLL: (Junior): We’re about to embark on a full USA Spring tour for March, April and May. Check out the dates here: http://www.oneeyeddoll.com/tour

As for the best show… that might be a question best left to the fans haha.

RYL: “Committed” appears to be one of the fans favorite,  what inspired its verses?

ONE EYED DOLL (Kimberly): That one falls under the, “Life Experiences” category. That’s all I really like to say about it..

ONE EYED DOLL:(Junior): I drove 12 hours to see a show once.

But that’s nothing compared to the crazy drives some of our fans have made. Some of them spend weeks following us around the country.