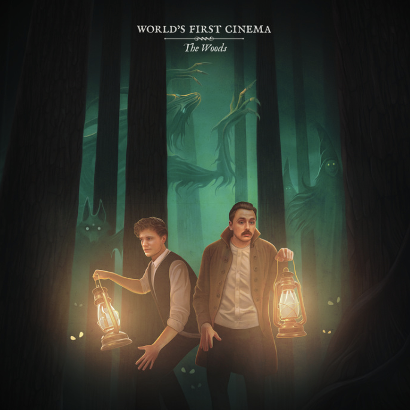 rockyourlyricsMarch 29, 20210 views
News0 views 05 min read
Following on from the huge success of their recently released debut EP ‘Rituals,’ which has since amassed more than four million streams in as many months, and received key tastemaker support from various media outlets, fast-rising duo World’s First Cinema now return to deliver their latest euphoric offering “The Woods”, which can be streamed now at https://worldsfirstcinema.ffm.to/thewoods.
Channelling more of that fresh and cacophonous direction they brought to their most recent collection, ‘The Woods’ sees the duo unveil one of their more anthemic cuts to date. Bringing back another dose of their bold and bouncing signature production, this next phase of World’s First Cinema is the beginning of a broader and more explosive sound that feels like just the tip of the iceberg.
Speaking about the new single, they added, “‘The Woods’ takes listeners on a journey to survive the night in a forbidden forest whilst dangerous and mystical predators close in on all sides.
“Sonically the track implements intricate pop rock production peppered with unique movie foley sounds to bring the story to life in vivid color. Climaxing in a huge ballad-esque chorus, the song boasts a unique perspective in the Pop Rock world.
“‘The Woods’ acts as the first offering in a universe building lore inspired by the bands obsession with Horror movies and Dungeons & Dragons. The stage is set to swallow listeners into a world synonymous with what we typically see only in books, tv shows & films.”
World’s First Cinema’s recent EP Rituals was released on February 12th 2021, and received huge praise from across the board. The EP’s preview singles “Can’t Feel Anything,” “Red Run Cold” and “Cold Sets In” earned spots on Spotify’s Pop Rock Shot, Fresh Finds, Future Hits, Fresh Finds Pop and Pop Rock playlists amongst many others.
World’s First Cinema’s origins begin back in 2019, when Fil Thorpe, a founding member of Neck Deep, the multi-award winning rock outfit that also cracked the #2 spot on the US album charts, chose to leave his formative outfit in pursuit of a career in production. Having now relocated to Los Angeles he met John Sinclair, alternatively known as Saint Claire, who had previously collaborated with Macklemore on his 2017 single ‘Excavate’. Between them, they have enough knowledge of the commercial music world to fill an Olympic-sized swimming pool, but now they are together, they have their heart set on something far more outlandish.
The concept behind World’s First Cinema has always been to create something more than just another throwaway pop record. While they still inhabit this world sonically, their intention is to create bold and cinematic journeys that showcase them as musical adventurers, shaking off expectation and convention in favour of well-spun narratives and Victorian inspired eccentricity.
Starting a new project from the ground up is no easy feat, and to do so during a global pandemic is even worse, but Fil and John are not only determined to head into the new year with bags of material, they are already plotting their next moves. These few introductory offerings are simply Act One of a yet unending saga that they plan to push as far as it will go. Channelling the dark atmosphere and theatrics of Panic! At The Disco and My Chemical Romance, the duo plan to spend the next few years writing, creating, producing, and touring a wave of fascinating material that see them take the idea of the concept release to new and exciting heights, all paying homage to the glittering fanfare of fantasy novels and otherworldly inspirations through a mixture of electrifying production and breath-taking live shows.
“This is the sonic foundation of what’s to come” – World’s First Cinema