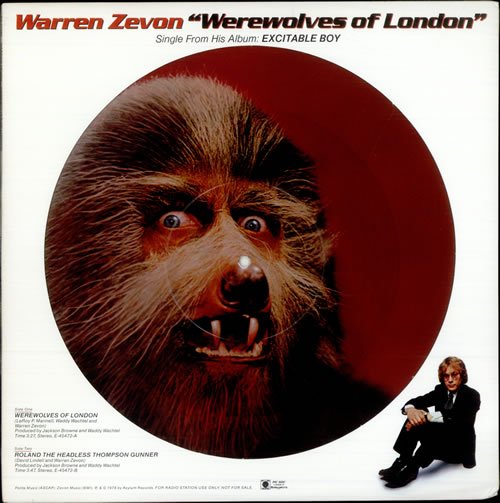 Warren Zevon most important songs: “Lawyers, Guns and Money”, “Johnny strikes up the band”, “Roland the Headless Thompson Gunner” and Werewolves of London.

Warren Zevon is first a musician then a rock singer and lyrics writer that had a lot of success  during the late seventies.

His style can be defined Folk, Dark, all characterised by a very special sense of humour.

He will die young, at the age of 54 , and later he will receive five Grammy Awards.

WereWolves of London is a clear example of the Zevon’s humour; written in 1978 and part of the album “Excitable Boy”

In the lyrics Zevon is picturing this werewolf that goes around London, he sees it in Trader’s Vicks he sees it holding a Chinese food menu, but at the same time talks about the fact that a lot of people was killed by him.

But at the end the suspect……the werewolf wasn’t real…….it was just Lon Chaney ! an american actor very famous because he was playing a lot of very scary caricatures.

Would you imagine? this song was one of the biggest success of Warren Zevon!

auuuuuuuuuuuu (the intro of the song remember us the sweet home Alabama …do you agree?