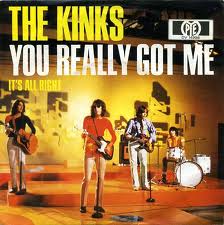 You Really Got Me – The Kinks

There are many versions of the story that tell us how “You Really Got Me” has been written.

Let’s start with saying that, the song has a great importance musically speaking…why?

It has been written in 1964 and it his one of the first major successes entirely built around power chords.

Even the particular sound of the guitar it has been obtained in a very innovative way…..cutting with a razor the amplifier of the guitarist Dave Davids.

Did you know that some people say that the solo of guitar was made by Jimmy Page ? The famous guitarist of Led Zeppelin said that it isn’t true….. too late to stop the creation of a legend.

Van Halen as well, did a great cover of this song back in 1978 with a even more powerful guitar!

The lyrics, written by Ray Davis, are talking about a story with a girl that, almost suddenly, is able to “get” the man and to make him falling in love.

Other interpretations of the song are saying that, instead, it talks about Cocaine.