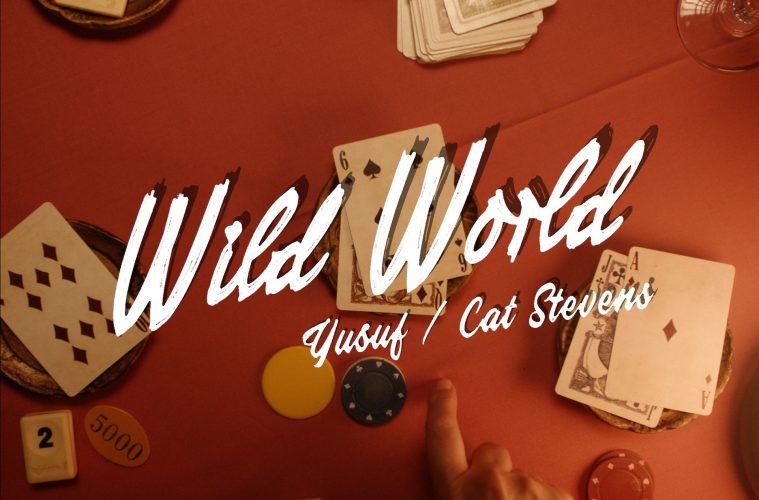 The film shows how much we need art to direct our thoughts sometimes towards inexpressible goals; to relive early childlike innocence and keep our eyes of hope open beyond the clouds of war and material darknesses

Yusuf / Cat Stevens launches his latest music video for ‘Wild World’. The fourth single taken from ‘Tea for the Tillerman²’—the reimagined rework of his classic 1970 album, recently debuting at Number 4 in the Official UK Albums Chart.

The brilliantly eccentric style of the new video combines elements of Wes Anderson, Casablanca and Bugsy Mallone. Child actors play out a Blackjack gambling duel which bounces back-and-forth as the ill-fated cards fall between the house dealer and the plucky winner. Mental games of revenge invoke thoughts which jaunt us into a bruising boxing match as well as brutal excursions into WW2.

With its Tango lilt, Berlinesque accordion and smooth clarinet lines, this new cinematic reworking of ‘Wild World’ is recognised as one of the biggest stylistic departures on the new album.

As with ‘Where Do The Children Play?’ and ‘Father & Son,’ the new video of ‘Wild World’ adventurously draws upon the timelessness of the song’s lyrics to capture the powerful message they contain. The central motif of a “Wild World” has been undeniably proven by the precarious state of the world we are living in right now, with war and aggression closing in on us from ever side.

Ultimately, the relief from his oppressive vision comes through the even greater imagination of a pure soul (a childish re-cast of Ingrid Bergman) who, not limited by need for material and power gains, is able to transcend into the realm of the stars with a smile—and an accompanying cup of ‘Tillerman Tea’. Yusuf’s words tell us of the dangers that are to be found in the world are overcome with love and a dream of something better…beyond.

‘Tea for the Tillerman²’ debuted at Number 4 in the Official UK Albums Chart, marking Yusuf / Cat Stevens’ ninth UK Top 10 album, and highest charting studio release in over 40 years. Originally charting at Number 20 in the 1970 UK Albums Chart upon its initial release 50 years ago, ‘Tea for the Tillerman’ went on to become one of the most influential albums of all time, bringing the world classic songs like ‘Wild World’, ‘Father And Son’ and ‘Where Do The Children Play?’

The newly re-imagined ‘Tillerman²’ sees the entire record re-cast for a new age. These are modern folk tales that will resonate with any open and receptive spirit and Yusuf is our humble yet expert storyteller, they are allegories for ours and all times. ‘Tea for the Tillerman’ has already carved an indelible mark in the bedrock of popular culture and with this new version we are invited to once again witness its magic and mysteries by an artist who has spent the intervening 50 years fearlessly challenging the limits of his own understanding and insight.