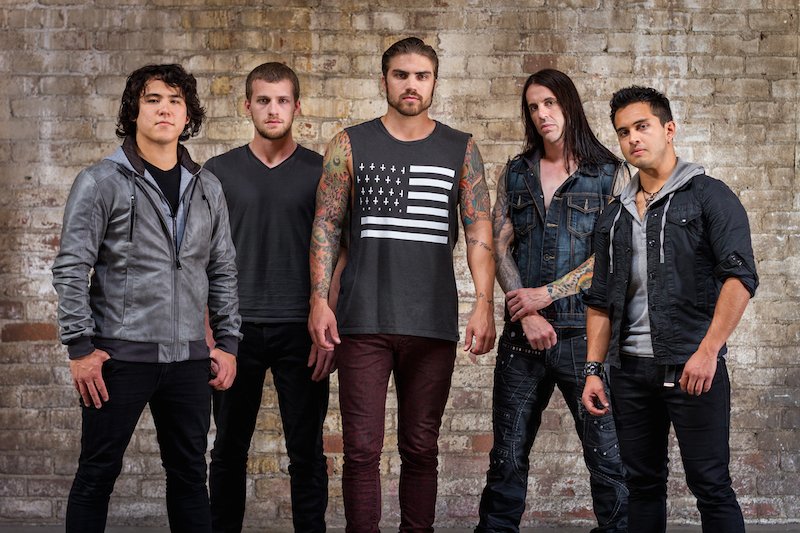 RYL: Your single “Zombies in the Sun” is obtaining a great success of public, can you tell us what is the meaning behind its lyrics?

I think many of you can relate to the fact that best friends, moms, dads, can sometimes be addicted and we would never know.  “Show me who you really are” is a demand to come out of the dark and be who you once were before your addiction.

RYL: The album has been released a month ago, which was the reaction of your fans?

LETTERS FROM THE FIRE:  We had been on hiatus for a while before we were able to find Elliot.  The anticipation was pretty high when we had announced our new singer.  So far the fans have been super stoked on the new sound and what we have been accomplishing.  We are grateful for the patience they gave us and the second chance we have had to share our music with them.

RYL: There is a common meaning between all the songs of the album?

LETTERS FROM THE FIRE:  The songs are about internal struggles and experiences that we have seen in our life.  I guess you can say the common thread is the human experience.

RYL:  How do you plan to promote it?

LETTERS FROM THE FIRE:  We have done a few exclusive releases of the music video as well as the lyric video with amazing companies such as Revolver and Loudwire.  But the bulk of our promotion for this EP will stem from touring with Trapt, Non Point, Eyes Set To Kill, Pop Evil, and Otherwise.

LETTERS FROM THE FIRE:  Lyrics are generally written to riffs.  Music inspires a feeling or mood and they will normally take us to a place in our life.  Then we take those emotions and stories and construct our songs.

LETTERS FROM THE FIRE:  That question is very subjective haha.  I mean what is best and why?  Is it because the lyrics are kick ass?  Or the riff is kick ass?  I honestly couldn’t tell you.  My favorite verse to play however…is a song called “Reaction” that will be on our upcoming record!

RYL: Do you remember the day you wrote “Waiting”?

LETTERS FROM THE FIRE:  Musically I do.  I remember needing something epic and sad sounding and started experimenting with counter point clean picking.

My favorite part of that experience was adding the massive orchestra behind it.  When Elliot flew in from Arizona, he had the lyrics and concept already written from the demo.

RYL: What inspired “This Moment”?

LETTERS FROM THE FIRE:  We like many others out there feel like our voice is sometimes squashed.  We however write and perform music because it gives us that platform to say what we want and to feel free doing it.

“In this moment, we speak free, without punishment, for you and me,” is really a sentiment that describes us at a show with our fans…screaming…losing our minds…and doing what we want for that specific moment in time.